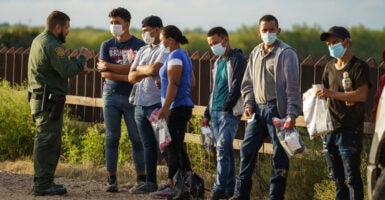 Border officials would be able to deport migrant families who illegally enter the U.S. and aren’t expelled under Title 42 under the “expedited removal” proceedings without court hearings, according to the Department of Homeland Security.

“This is all smoke and mirrors and I believe the administration is talking about [expedited removal] because they are prepping the battlefield to get rid of Title 42 and say, ‘Oh, look, there’s no difference here. We’re still going to have expedited removal, even without Title 42.’ It’s complete B.S.,” Mark Morgan, former Customs and Border Protection acting commissioner and a Heritage Foundation visiting fellow, told The Daily Caller News Foundation on Tuesday.

“It’s B.S. because [expedited removal] has been around since 1996, so they’re going to tout [it] like it’s something new that they’ve done,” Morgan added. “It’s been used under both Republican and Democratic administrations and it would be used right now under the Biden administration, if not for Title 42.”

The Biden administration announces it will place migrant families who are not expelled under the Title 42 pandemic restrictions in “expedited removal” proceedings, which allow U.S. border officials to carry out deportations without court hearings. pic.twitter.com/DjYlWgtQQM

Individuals who attempt to enter the U.S. between official ports of entry or try to bypass inspections at ports of entry could face “long-term immigration consequences,” according to DHS.

“[Expedited removal] is for individuals who don’t claim asylum, so if someone comes across and they don’t claim asylum and/or the very rare case where it’s immediately determined that a credible fear claim is baseless and fraud on its face,” Morgan told The Daily Caller News Foundation. “Everybody else goes under Title 8 240 proceedings, which, under this administration, means they’ll be released into the United States.”

Title 8 “240 proceedings” are part of the regular removal process where individuals appear before an immigration judge where they can make a claim to remain in the U.S., according to Human Rights First. Law enforcement officials can order migrants deemed inadmissible through expedited removal, which was established under the Illegal Immigration Reform and Immigrant Responsibility Act of 1996.

“It will have no impact because every single unaccompanied minor does not qualify for [expedited removal] and every family that’s coming across are coached about exactly what to say to pass the low threshold of credible fear,” Morgan said. “So there won’t be a single family removed under ER, there won’t be a single [unaccompanied alien child] removed under ER, this is mainly for single adults, as ER was originally designed for.”

The Biden administration is expected to leave Title 42 in place until the end of August, a DHS spokesperson told The Monitor on July 21. Border officials encountered nearly 190,000 migrants in June, over 100,000 of which were rapidly expelled under Title 42, according to U.S. Customs and Border Protection.