Lying About ‘Misinformation’ to Justify Tyranny 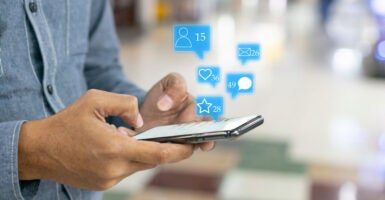 This week, President Joe Biden was asked whether he had any message for social media amid a dramatic rise in the number of diagnosed COVID-19 cases thanks to the delta variant.

None of this is accurate. Facebook is, first of all, a platform; it is not a publication with the same responsibilities of editorial oversight as a publisher. To treat Facebook as such would be to transform its purpose.

Furthermore, on a purely factual level, it is simply untrue that Facebook users are disproportionately likely to avoid vaccination—in fact, according to Facebook’s statistics, vaccine acceptance in the United States among its users now stands between 80% and 85%, and 3.3 million Americans have used its vaccine finder tool to seek a location for a vaccine.

So, what’s driving the Biden administration’s finger-pointing? Its broader agenda to utilize the massive market dominance of the social media platforms to squeeze alternative media sources out of existence.

Before the rise of social media, most Americans who used the internet for news bookmarked a variety of pages and then visited them individually. Over time, as social media grew and as people began to access stories they liked through an algorithmically-controlled newsfeed, Americans used social media for news. This centralized the mechanism for information dissemination.

Now, the left sees an opportunity: If all the news is accessed in one place, by restricting access in that place, the news monopoly once held by legacy media can be reestablished. All that will be required is labeling everyone it doesn’t like “misinformation.”

Kara Swisher of The New York Times, who has spent the past several years attempting to pressure Facebook into exactly such censorship, says as much openly. According to Swisher, Biden wasn’t wrong to say Facebook was killing people. Actually, writes Swisher, the problem is that Biden restricted his analysis to the coronavirus:

Attempting to stop falsehoods by claiming to offer good information is like using a single sandbag to hold back an impossibly fetid ocean. It’s like that when it comes to a range of once-anodyne, now divisive issues, from election integrity to critical race theory to whatever.

“Whatever.” Literally any topic on which Swisher disagrees is now dangerous misinformation that must be curbed.

This week, NPR went so far as to pressure Facebook to suppress traffic to my website, Daily Wire, on precisely this basis. NPR admitted that we don’t print falsehoods, that we don’t spread conspiracy theories, and that we are honest and open about our conservative perspective.

So, why should we be suppressed? Because, according to NPR, we cover “specific stories that bolster the conservative agenda.” And, quoting an expert, NPR reports, “If you’ve stripped enough context away, any piece of truth can become a piece of misinformation.”

The authoritarianism of the left is in full swing. Americans must spot it and fight it before it destroys our ability to see anything other than that which the left wants us to see.