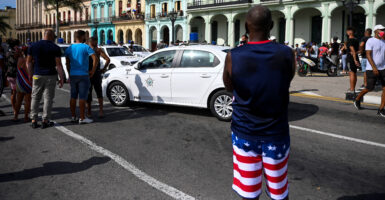 While it might be "fashionable" in leftist circles in the U.S. to besmirch the American flag, for the oppressed in Cuba, it’s a symbol of freedom. That's clear from a Cuban man who was making a fashion statement of his own as he marched in front of the Cuban Capitol during a demonstration against the government in Havana on Sunday. (Photo: Yamil Lage/AFP/Getty Images)

What’s ruined Cuba isn’t the coronavirus. The lethal virus of communism did.

Massive protests erupted in Cuba over the weekend. Cubans, in dozens of cities, could be heard shouting “Freedom!” and “Down with communism!”

Demonstrations have occurred in Cuba in the past, but these appear to be truly unprecedented in scope. They come as the country has been hit with several catastrophes, including severe food and medicine shortages.

But what about “compassionate” communist economics and Cuba’s vaunted socialized health care system?

The truth is, Cuba is exporting doctors to other countries to pay the government’s bills as its own people can’t get access to basic treatment and medicine.

In fact, as The Wall Street Journal explained, the Cuban government has tried to use “the pandemic as a way to earn hard currency for the ruling elite and boost its legitimacy around the world.”

As always, under communism, some are more equal than others.

Now, Cubans are not just dealing with COVID-19, but other health crises—for example, a recent outbreak of scabies, an easily treatable skin condition.

“Cuba promotes itself as a world-class health care powerhouse,” The Wall Street Journal noted. “But as the scabies epidemic shows, the decrepit hospital and outpatient network cannot even tend to run-of-the-mill illnesses, never mind COVID-19.”

In other words, this isn’t just an outlier from a once-in-a-century pandemic. Instead, it’s the latest catastrophe in a long history of failure and dysfunction. The material deprivation Cubans frequently face is hardly imaginable to the average American.

Remember when the U.S. was hit with a toilet paper “shortage” in the early days of the pandemic? It was short-lived and hardly a problem at all. More than a few Americans likely still have a huge stockpile in their homes after panic-buying a lifetime supply.

Shortages far, far worse than what Americans have ever experienced are a regular occurrence for our Caribbean island neighbor, even in prosperous times.

The protests are a result of more than a half-century of misrule under the Marxist regime that began with Fidel Castro. In a country in which freedoms of speech and assembly are deeply controlled by the government, many have had enough and are willing to take to the streets anyway.

The sheer economic deprivations are one thing, but even more unimaginable for most Americans to even contemplate is life under ruthless totalitarianism.

Some of the Cuban protesters, it must be noted, can be seen waving American flags.

The American media and most elite institutions obsess over celebrity athletes’ protests of the national anthem, they promote our country’s “racial awakening” and reckoning with our past, and mobs literally tear down our history if governments don’t do it for them.

America’s—and the West’s—imperfections are used to sully, diminish, and obscure our triumphs.

However, for people suffering under truly repressive regimes, the American flag is the universal symbol of freedom. Even in this time of elite-generated self-doubt and self-loathing, the idea of the United States as a beacon of freedom and strength is an enduring one for people living under the boot of authoritarianism.

Perhaps the real reckoning should be for those who made excuses for—and all-too-often openly embraced—the Cuban dictatorship.

Just last year, Sen. Bernie Sanders, I-Vt., tried to justify his past cheerleading for communist Cuba by saying that the revolution wasn’t all bad. After all, Sanders said in a “60 Minutes” interview, Cuba had a big literacy program or something.

As my colleague Mike Gonzalez has pointed out, Cuba had high literacy rates before the communist revolution. And now, as a result of the revolution, literacy counts for a whole lot less, since information is tightly restricted by the government.

Former NFL quarterback Colin Kaepernick protested our national anthem and showed up at a press conference in a Fidel Castro shirt.

Meanwhile, Cubans—who do not have the right of free speech or really anything else protected under the law—wave the American flag and shout about ending the dictatorship Castro created.

Protesting in Cuba really might mean you lose everything, including your life, rather than winning a multimillion-dollar Nike contract.

But for many on the left, their lack of understanding of human nature leaves them unable to see that.

That’s why a bill recently passed in Florida to teach K-12 students about communism and totalitarianism is so important.

The law includes the creation of a repository of firsthand accounts from people who suffered under the Castro regime. Their stories are important reminders of what makes our country different and why we must cherish and defend our priceless constitutional republic.

Life under communism begins with the destruction of freedom in the name of equality, leads to people having nothing to eat, and ends when the regime can no longer stamp out flickering flames of liberty.

Hopefully, someday, Cuba will be free. Until then, let’s make sure there is still an America willing and proud to remain a symbol of rebuke to tyrants everywhere.