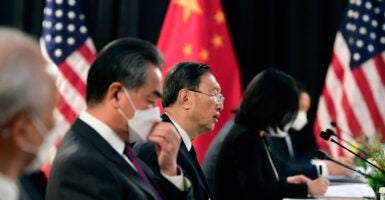 “If you don’t scare Congress, it goes fishing,” Will Rogers once said. “If you do scare it, it goes crazy.”

Regarding China, the humorist’s wisdom is bearing out on both ends of the Capitol.

The Senate in June passed the U.S. Innovation and Competition Act, a $200-plus billion (until recently, a lot of money) stab at industrial policy.

Sure, there’s lots of good in the bill. The finance, banking, and foreign relations portions do sensible things; for instance, extending the Generalized System of Preferences to keep American markets open to trade with countries vulnerable to Chinese influence.

That’s smart, but bailing out an industry, semiconductors, that incidentally is in no need of a bailout is crazy.

On the other end of the Capitol, they’re going fishing.

The House Foreign Affairs Committee is in the midst of a marathon markup of the Ensuring American Global Leadership and Engagement (EAGLE) Act. As introduced, it was mostly a collection of mandated reports, “sense of Congress” provisions, and expensive virtue signaling on unrelated issues, such as climate change.

In markup, the committee’s majority seems mostly concerned with heading off lines of attack on what will remain a very weak bill.

That’s a shame, because it needn’t be that way. The Senate Foreign Relations Committee produced a bipartisan foreign policy section of the U.S. Innovation and Competition Act. It’s not perfect, but it is serious. The House Foreign Affairs Committee thus far has gone with an entirely partisan approach, and as a result, has come up with something much less serious.

There are so many good ideas out there. There were proposals left on the table in the Senate Foreign Relations Committee markup and on the Senate floor, such Sen. Marco Rubio’s amendment renaming the U.S. representative to Taiwan just that, “representative,” and requiring Senate confirmation for the position.

There were also the proposals from the House’s China task force, an earlier opportunity for bipartisan cooperation the majority missed. There are things that the Senate did in its bill—such as forcing an American diplomatic boycott of the 2022 Olympic Games in China—that could use reinforcement to make sure they stay in the bill.

This House markup is just the next step in the process of creating what will hopefully be a comprehensive China bill. It’s not clear what shape that process is going to take going forward.

The Senate’s U.S. Innovation and Competition Act was the work of seven committees. The House has passed two components, one on energy and one on science. And now the House Foreign Affairs Committee is considering the foreign policy piece.

In the end, it’s plausible that each element will have to pass separately. The problem is that, in that eventuality, you can bet the pieces that hand the most money out to constituents move. Foreign policy is generally not good for that, but government “investments” almost always are.

Another thing Will Rogers said was that he would “never lack for material when Congress is in session.” Here’s hoping Congress will ultimately prove him wrong on its China work.