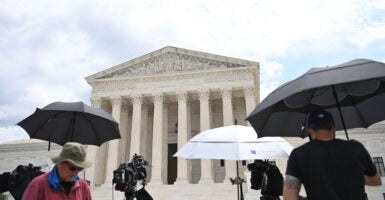 In Brnovich v. DNC, the Supreme Court found that Arizona did not violate the Voting Rights Act by banning out-of-precinct ballots or voter harvesting. Pictured: Photographers wait outside of the Supreme Court on July 1. (Photo: Mandel Ngan/AFP/Getty Images)

On the last day of its term, the Supreme Court delivered a victory for those who support commonsense election integrity measures.

The 6-to-3 result in Brnovich v. DNC was the right decision, though the three dissenting justices didn’t see it that way.

Neither Arizona’s “out of precinct” policy, which requires that a ballot cast by someone on Election Day will not be counted if cast outside of that person’s assigned precinct, nor Arizona’s prohibition on vote harvesting, which provides that only an election official, a mail carrier, or a voter’s family member, household member, or caregiver can collect and deliver someone’s mail-in ballot, violate Section 2 of the Voting Rights Act.

As a matter of first principles, Justice Samuel Alito, writing for the majority, noted that “Arizona law generally makes it very easy to vote,” especially considering that all Arizona “voters may vote by mail or in person for nearly a month before election day.”

He noted that after a trial, “a District Court upheld these rules, as did a panel of the United States Court of Appeals for the Ninth Circuit,” but that the 9th Circuit, sitting en banc (that is, as a whole), later found them to be unlawful. Alito said that in doing so, the “en banc court misunderstood and misapplied § 2.”

>>> WATCH: Leftists continue to press for mass mail-in voting. Here’s why that can result in major issues for voters.

But while the Supreme Court reached the right result, it ducked the larger question of what standard courts should apply in future cases when deciding claims under Section 2 of the Voting Rights Act. Explaining this decision, Alito said:

[W]e think it prudent to make clear … that we decline … to announce a test to govern all VRA § 2 claims involving rules, like those at issue here, that specify the time, place, or manner for casting ballots. Each of the parties advocated a different test, as did many amiciand the courts below.

In a brief filed in December in support of [Arizona’s voting laws], the Department of Justice proposed one such test but later disavowed the analysis in that brief. The Department informed us, however, that it did not disagree with this prior conclusion that the two provisions of Arizona law at issue in these cases do not violate § 2 of the Voting Rights Act.

All told, no fewer than 10 tests have been proposed. But as this is our first foray into the area, we think it sufficient for present purposes to identify certain guidepost that lead us to our decision in these cases.

This is something. But maybe not enough.

Some, such as the Cato Institute’s Ilya Shapiro and Stacy Hanson, had urged the court to “hand down a bright-line rule so courts, state legislatures and citizens alike properly understand Section 2’s protections” and to “lay out a clear jurisprudential framework for evaluating Section 2 claims, free of balancing tests and other subjective standards that are grist for result-oriented and public-confidence-destroying judging.”

While the court might not have given the bright-line rule requested, it did lay out five “guideposts.”

First, the court said that “the size of the burden imposed by a challenged voting rule is highly relevant” and that “[m]ere inconvenience cannot be enough to demonstrate a violate of § 2.” Alito said there “is a difference between openness and opportunity, on the one hand, and the absence of inconvenience, on the other.”

Second, the court said that “the degree to which a voting rule departs from what was standard practice when § 2 was amended in 1982 is a relevant consideration.”

Furthermore, the court found it “relevant that in 1982 States typically required nearly all voters to cast their ballots in person on election day and allowed only narrow and tightly defined categories of voters to cast absentee ballots.”

Third, the court said the “size of any disparities in a rule’s impact on members of different racial or ethnic groups is also an important factor to consider. Small disparities are less likely than large ones to indicate that system is not equally open.”

Fourth, the court said that “courts must consider the opportunities provided by a State’s entire system of voting when assessing the burden imposed by a challenged provision.” Alito said that “where a State provides multiple ways to vote, any burden imposed on voters who choose one of the available options cannot be evaluated without also taking into account the other available means.”

Fifth, and finally, the court said that “the strength of state interests served by a challenged voting rule is also an important factor that must be taken into account,” adding that “every voting rule imposes a burden of some sort, and therefore, in determining ‘based on the totality of the circumstances’ whether a rule goes too far, it is important to consider the reason for the rule.”

And to be clear, the court held that “[e]nsuring that every vote is cast freely, without intimidation or undue influence, is also a valid and important state interest.”

The court said other factors that lower courts have considered are less helpful when facially neutral time, place, or manner voting rules are being challenged.

And the court specifically disavowed a legal theory championed by Harvard law professor Nicholas Stephanopoulos that would have imported the disparate-impact theory of liability employed in Title VII and Fair Housing Act cases on the basis that such a theory would “have the effect of invalidating a great many neutral voting regulations with long pedigrees that are reasonable means of pursuing legitimate interests” and that it “would transfer much of the authority to regulate election procedures from the States to the federal government.”

The Supreme Court’s decision in this case will have an immediate impact. Because the Biden administration’s Justice Department filed its lawsuit against Georgia’s recent election law before the court decided the case, it will likely withdraw or amend its complaint because it alleged that Georgia’s “out of precinct” provision, which is similar to Arizona’s, was racially discriminatory. That claim now seems unlikely to succeed.

Make no mistake, the Supreme Court’s decision in this case is the correct outcome and will provide states with greater leeway to protect the integrity of their electoral processes. But, given how common and contentious election disputes are, there is little doubt that we can expect more litigation around the court’s five newly announced guideposts in the future.