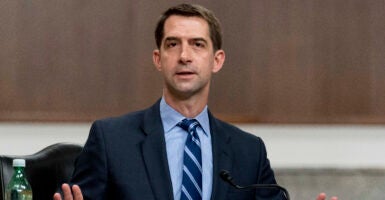 Sen. Tom Cotton suggested he would ask tougher questions of nominees of top military command positions about their views on critical race theory before they are given promotions.

Cotton, R-Ark., an Army veteran who fought in Afghanistan, said the doctrine gaining a foothold in a number of institutions, including the military, is contrary to the Declaration of Independence, the U.S. Constitution, and Martin Luther King Jr.’s “I Have a Dream” speech, all of which promote enduring American values.

“Usually, there is never a confirmation hearing unless it’s a four-star promotion to a major combatant command or one of the services,” Cotton said Thursday. “But maybe it’s time to change that. Maybe it’s time we start ensuring that our flag officers subscribe to those very basic principles that are outlined in our Declaration and King’s ‘Dream’ speech.”

Cotton made his remarks during a webinar sponsored by The Heritage Foundation, the parent organization of The Daily Signal.

Military commanders have included pro-critical race theory books on reading lists, such as “How to Be an Antiracist” by Ibram X. Kendi and “The New Jim Crow” by Michelle Alexander.

While critical race theory at corporations or universities is more extensive, it has far fewer consequences than pushing the theory in the military, the Arkansas lawmaker said.

“What happens if it harms unit cohesion and morale in our military? Then we literally are risking our freedom,” Cotton said. “That’s why it’s so important that the U.S. military’s priority should remain what it always has been—to fight and win real wars, not to get distracted by culture wars.”

Cotton and Rep. Dan Crenshaw, R-Texas, a former Navy SEAL, set up a website through which service members can report instances where they are being subjected to critical race theory in the course of their duties.

Other Republican lawmakers have similarly pushed back against the doctrine, which posits that people are either oppressors or oppressed, based on their race.

Cotton seemed to make a not-so-subtle swipe at the woke activism of Coca-Cola and of professional sports leagues in noting that critical race theory is most corrosive in the military.

“They don’t just play a kids’ game for money or sell sugary beverages. They are the institution that keeps us free and safe,” the Arkansas Republican said of the military. “They make almost everything else possible in our country in protecting our way of life. So, it’s the most corrosive place where you can teach these small, specious doctrines.”

Cotton said he has heard from enlisted military personnel and old military friends that the infusion of critical race theory in the military is new in the past year.

“Most of the contacts we get, most of my buddies who contact me still, they just want to know why we can’t go back to what we all took an oath to, to our founding principles in the Declaration and the Constitution, or for that matter, why these training sessions can’t just replay Martin Luther King’s ‘Dream’ speech, and that we should all be judged by the content of our character, not the color of our skin,” he said, adding:

Or, to put it in military terms, by our tactical and operational performance, in addition to the content of our character, not the color of our skin.