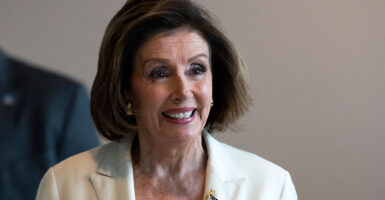 The No. 2 Republican in the House is accusing House Speaker Nancy Pelosi of not being honest about China regarding the origins of the coronavirus. (Photo: Tom Williams/CQ-Roll Call/Getty Images)

House Minority Whip Steve Scalise is accusing House Speaker Nancy Pelosi of not being honest about China over the origins of the coronavirus.

“Today, we are here with the [GOP] Doctors Caucus to talk about something we’ve been calling on for a long time, and that is demanding actual accountability and demanding that Speaker Pelosi hold hearings to investigate the origins of COVID-19,” Scalise, R-La., said Thursday.

The move comes after House Minority Leader Kevin McCarthy, R-Calif., announced a plan Sunday comprising “eight pillars” for “holding China accountable” for the coronavirus pandemic. McCarthy said that, as of this month, 3.8 million people worldwide have died from COVID-19, including more than 600,000 Americans.

At a Thursday press conference, Scalise said that it’s past time to get details on the origins of the coronavirus.

“For more than a year now, House Republicans have been making these calls as we’ve heard more and more reports and evidence mounting that this evil virus may have started in the Wuhan lab [in China],” the Louisiana Republican said.

Scalise said that Pelosi, D-Calif., should have no problem holding a hearing if she has nothing to hide.

“In fact, as more emails become uncovered that evidence grows daily, and yet Speaker Pelosi still refuses to hold a hearing on the origins of COVID-19. Why would Speaker Pelosi want to try to cover up for what China did?” he asked.

Henry Connelly, a spokesman for Pelosi, disputed Scalise’s charges. “Whip Scalise must have the Speaker confused with President [Donald] Trump, who spent the critical early months of the COVID outbreak relentlessly praising [Chinese President Xi Jinping’s] leadership while leaving our nation unprepared for a pandemic that killed more than half a million Americans,” he said.

In a hearing on Tuesday, Scalise had accused Pelosi and her fellow Democrats of covering up COVID-19’s origins on behalf of China.

“Speaker Pelosi and the House of Representatives should not be covering up for China’s lies and potential crimes,” he said. “We should be coming together on a bipartisan basis to search for those answers and shine the light of transparency on the origins of this virus to the world.”

“Every American deserves to know the truth about the COVID cover-up. That’s why one of the bills House Republicans are highlighting is ‘The World Deserves to Know Act’ that I co-introduced with my colleague from Virginia, [Rep.] Rob Wittman,” Stefanik said Wednesday.

“This bill calls for a full investigation to determine the extent of China’s actions and cover-up,” she added.