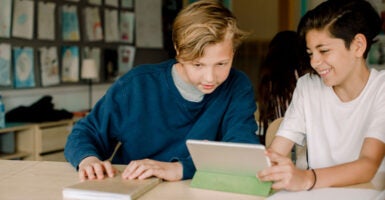 The “bias incident response system” created by a Virginia school system allows students to “report anonymously [on] any other student and ask that they be investigated," says a lawyer for parents who sued the school board for violating students' free speech rights. (Photo illustration: Klaus Vedfelt/Getty Images)

Parents in an affluent Virginia county are speaking out against their school system’s online “portal” that allows students to anonymously report on each other for exhibiting racial or sexual bias.

Daniel Suhr, a lawyer representing parents in a lawsuit against the Loudoun County school system, told The Daily Signal that the “so-called bias incident response system” is in direct violation of Americans’ free speech rights.

“Rather than creating a diverse community where students are welcomed,” Suhr said, “Loudoun is saying to students, ‘If you come from a particular background or if you come to school with particular views and values, you’re not welcome here. In fact, if you share those views and values with your classmates, we will shut you down.’”

“And that violates two promises of the Constitution: the promise all of us—including students—have to free speech and security, in the 14th Amendment, that all of us will receive equal treatment under the law regardless of our race,” the parents’ lawyer added.

Five parents filed a lawsuit June 2 against the Loudoun County School Board for violating the free speech rights of students.

“We’ve seen these biased reporting systems in higher ed before, but they’ve never been prevalent on the K-12 level. I think Loudoun is one of the first places in the country where children as young as sixth grade are subject to a reporting system like this,” Suhr said.

Suhr is a senior attorney at Liberty Justice Center, which represents the parents in the lawsuit against the school board. The center says it works to “to protect students, families, entrepreneurs and other Americans whose fundamental constitutional rights have been violated.”

Loudoun County Public Schools set up the “portal,” which Liberty Justice Center says is technically a Google form. Administrators implemented the reporting system this spring in the county’s middle schools and high schools.

To use the online system, any student may log in with a student account. The format does not require a name to complete a report; complaints are reviewed initially by a “supervisor of equity,” then by “equity ambassadors,” according to Liberty Justice Center. The school system has not said how widely the reports will be circulated.

Parents filed the lawsuit against the Loudoun County School Board shortly before the board decided to appeal a judge’s June 8 order to reinstate an elementary school gym teacher suspended by the school system for saying he wouldn’t call children who “identify” as transgender by their “preferred” names or pronouns.

The teacher, Byron “Tanner” Cross, had expressed his opinion during a “public comment” portion of the school board’s May 25 meeting.

The Loudoun County school system has become a prominent example of how critical race theory, so-called anti-racism, and what many parents consider a radical trangender agenda are taking hold in public schools across the nation.

A press release about the parents’ lawsuit from Liberty Justice Center says that “over the past two years, the [school] board and administrators have incorporated controversial and radical political theory into school curriculum.”

It adds: “Now they are asking students to be vocal supporters of these political views or face being excluded from school leadership positions and reported through a new ‘bias reporting’ system.”

Patti Hidalgo Menders, mother of a high school student and the named plaintiff in the parents’ suit, is quoted by Liberty Justice Center in its press release on the case.

“The school board has been trying to pretend discrimination and suppression of free speech isn’t happening in our schools,” Menders said, “but we see it in class lessons, in the books being promoted or banned in the library, and in the creation of new school programs.”

Suhr said the “bias incident response system” allows any student to “report anonymously [on] any other student and ask that they be investigated for a comment made inside or outside of school, or on social media, that someone finds inappropriate or offensive.”

“That’s basically encouraging students to judge one another and rat one another out on an ongoing basis,” the parents’ lawyer said.

Suhr said he also thinks it would be difficult to ensure that only students are reporting on one another, and are not being accused by teachers, parents, or others.

“The link was sent out to parents as well,” Suhr said, adding:

So it’s really an incredible extension of the government’s power over the lives of these students that no matter whether they are in or out of school or on social media, what they say can and will be used against them by people who are seeking to enforce this new ideology on the students and and are unwilling to tolerate any challenge or different view.

The lawyer said that the parents he has worked with who are part of the lawsuit are more than frustrated by the situation.

“Our parents are fed up and fired up,” Suhr said. “They feel like the school district has not been listening to them. They feel like this shift in priority away from college and career readiness and toward this new political ideology was not done with parent feedback.”

With in-person learning largely shut down for the past year during the COVID-19 pandemic, he said, parents have been getting clued in on what their children are learning in school and how Loudoun County and other school systems are shaping children’s political views.

Suhr said parents are “seeing what’s happening in their school … and all of a sudden they’re realizing, like, ‘Oh my gosh, this is not what I thought my school was teaching my kids, and this is antithetical to our values as a family.’”

“And so now they’re getting engaged in going to school board meetings and trying to bring back the school district with its fundamental mission to prepare kids for college and career rather than pushing a political ideology,” he added.