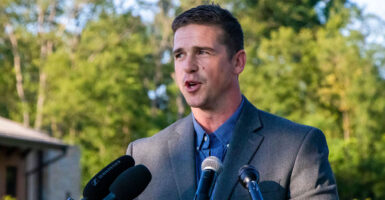 A school district in Virginia is appealing a judge’s June 8 order to reinstate an elementary school gym teacher who it suspended for saying he wouldn’t call children who “identify” as transgender by their “preferred” names or pronouns.

“Many students and parents at Leesburg Elementary have expressed fear, hurt, and disappointment about coming to school,” Loudoun County Public Schools said in a statement Friday announcing the appeal.

Byron “Tanner” Cross, who a Loudoun County Circuit Court judge ordered reinstated, had spoken out against proposed changes in school policy during the portion of a Loudoun County School Board meeting reserved for public comment, as The Daily Signal previously reported.

The Loudoun County public school system suspended Cross two days after he said at the May 25 meeting that he would not “affirm that a biological boy can be a girl, and vice versa,” citing his Christian faith. Judge James E. Plowman Jr. said in his June 8 ruling that Cross’ suspension with pay “adversely affected his constitutionally protected speech.”

But the Loudoun school system said in its statement that it’s appealing the decision to reinstate Cross because students don’t feel safe.

“Addressing those concerns is paramount to the school division’s goal to provide a safe, welcoming, and affirming learning environment for all students,” the statement said.

“While [Loudoun County Public Schools] respects the rights of public school employees to free speech and free exercise of religion, those rights do not outweigh the rights of students to be educated in a supportive and nurturing environment.”

Alliance Defending Freedom, a Christian legal aid organization, told The Daily Signal in an email that it is confident the Virginia Supreme Court will protect Cross’ First Amendment rights if it agrees to hear the school system’s appeal.