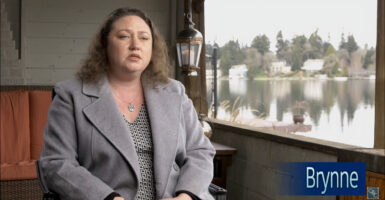 The new documentary “Trans Mission: What’s the Rush to Reassign Gender?” examines the harm of the "gender affirming" health care trend. Pictured: A parent of a daughter who was advised by her pediatrician to transition speaks out in the documentary. (Photo: The Center for Bioethics and Culture Network)

“The pediatrician said if I didn’t affirm my daughter’s identity, and I didn’t get her the help that she needed, and she killed herself, I was going to feel awfully guilty—right in front of my daughter.”

Horrific conversations like this are happening across the country, and are part of the “gender affirming” health care trend, which is pushing children to transition to the opposite gender.

This is just one of the many heart-breaking stories recounted in the groundbreaking new documentary “Trans Mission: What’s the Rush to Reassign Gender?”.

Produced by the Center for Bioethics and Culture, “Trans Mission” is an exposé of the “gender affirming” health care model and its destruction on children’s minds, bodies, and families as told by detransitioners—individuals who have undergone hormonal or surgical interventions to change their gender but decided to revert back—as well as medical professionals and parents of transgender children.

The documentary opens with Hacsi, a detransitioned man. While Hacsi was convinced earlier in life that he would be “picnicking on one of Saturn’s moons” before ever destransitioning, he eventually realized he was “undermining women” and could not continue living a masquerade.

Reflecting on his own experience, Hacsi warned that people should think more deeply about letting children transition, comparing it to giving children a car or letting them buy drugs. Children do not have “mature judgment” to be making decisions that will have irreversible consequences they cannot possibly understand yet.

Jade, a detransitioned woman, expressed similar concerns about allowing children to transition, and urged people to look at the underlying issues. She was molested several times as a child and, without knowing the risks of transitioning, thought being a man would solve her problems. Jade believed transitioning would make it as if the molesting happened to another person. After transitioning, though, the problems remained, and her body was permanently changed.

The documentary also told of pediatricians pressuring parents to transition their children before puberty. One such pediatrician featured in the documentary is Michelle Forcier, associate professor of pediatrics and assistant dean of admissions at the Brown University Alpert Medical School, who helps children on their “gender journey.” She compared this journey to a bus ride: The kids are driving the bus, parents are in the front seat, and pediatricians are in the back seat with the roadmap, helping parents and children choose between “safe” and “good” options.

But transitioning is far from safe or good. As Dr. Andre Van Mol, a board-certified family medicine doctor, shared in the film, gender-affirming pediatricians frame gender transition in terms of life and death—“Do you want a live son or a dead daughter?”—and state that early stages of transitioning are reversible.

But this framing of the problem does not follow the science. As Van Mol explained, there is no long-term evidence that transitioning decreases suicide, and, in fact, it has permanent consequences, ranging from infertility to blood clots.

He further shared that pharmaceutical companies are profiting greatly from transgender patients who increase their market share. With so much potential for profit, it’s no wonder that the scientific data is being suppressed or ignored. Emphasizing the importance of addressing underlying issues that are often tied to gender dysphoria, Van Mol encouraged parents and children to pursue “watchful waiting.”

Parents, too, are concerned about the uncritical gender-affirming approach. Despite urging from a pediatrician to begin transitioning her daughter, Brynne—one of the multiple parents interviewed—shared why she is pushing back:

The reason I’m being difficult in this is not because I don’t love her. It’s because I love her so much that I am willing to take on this whole ideology just to protect her from potentially making an irreversible decision in her future, and even if that means she wants to hate me and she doesn’t want to talk to me, I love her enough that I’m willing to keep fighting for her.

The documentary also touches on the political and social pressures coming from the U.S. Supreme Court to social media platforms.

Natasha Chart, the former executive director of the liberal feminist organization Women’s Liberation Front, told of the threat that the gender ideology behind the gender-affirming model poses to women’s rights. This is why Women’s Liberation Front filed a brief in the Supreme Court case Bostock v. Clayton County in defense of the funeral home’s right to enforce a sex-specific dress code.

“A man cannot be a woman,” declared Chart in footage from the Supreme Court rally. “There are doctors who will go to work today and … who will put 14-year-old girls into menopause and give troubled young girls cosmetic mastectomies.”

Others have been canceled after speaking out that a man cannot become a woman or vice versa. The documentary featured Canadian journalist and writer Meghan Murphy, who was kicked off Twitter after saying men are not women.

Similarly, the film shared the experience of Colin Wright, an evolutionary biologist who left academia. Attacked and deemed a transphobe after following the biology and declaring that sex is not a spectrum, Wright shared his disappointment: “The reason why I wanted to be in academia in the first place was because I thought that was the area that you go when you want to pursue truth.”

The film ends on a hopeful but harrowing note: This harmful trend will end, but at what cost? One mother warned it may take enough kids getting harmed before people see the need for change.

Dr. Quentin Van Meter, a board-certified pediatric endocrinologist, speculated that change will come when families and individuals file major lawsuits that take down the physicians, drug companies, hospital health care systems, and insurance companies that allowed this harm to children. Let’s hope it doesn’t come to that.

“Trans Mission,” directed by Jennifer Lahl and Kallie Fell, is available for viewing on YouTube and Vimeo. To learn more about the Center for Bioethics and Culture’s work, visit its website here.