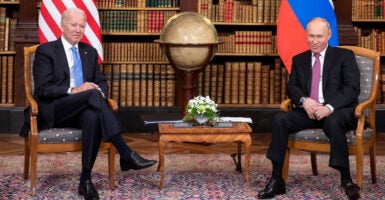 President Joe Biden met with Russian President Vladimir Putin in Geneva on June 16 to discuss a number of issues, including human rights, Ukraine, and cyberattacks. The summit was a result of the White House’s invitation to Putin this past spring in response to a massive Russian troop buildup along Ukraine’s border.

Regarding human rights, specifically, Biden brought up the potential death of Russian opposition leader and Putin critic Alexei Navalny, stating that the consequences of his death in prison “would be devastating for Russia.”

Biden also raised the issue of the potential release of U.S. citizens Paul Whelan and Trevor Reed. These two men, both former Marines, are being held in Russian prison based on illegitimate charges. He revealed at his press conference that the U.S. administration will “follow through with that discussion [of their release],” and that he would not “walk away on that.”

It was positive that Biden mentioned these three individuals directly by name.

As for Ukraine, Biden asserted that the United States has an “unwavering commitment to the sovereignty and territorial integrity of Ukraine.” This was an important statement to make, especially given Russia’s recent military buildup along the Ukrainian border, and the ongoing Russo-Ukrainian war and Russian occupation of Crimea.

Biden was right to hold Putin accountable in this way, but the problem is that it is not enough to expect Putin to hold to this standard, particularly given Putin’s track record of violating international norms. The U.S. must take the Russian threat seriously and bolster its cyber defenses to prevent future attacks.

Unfortunately, Biden directly failed in a couple areas. For one, he did not mention the United States standing behind Georgia’s sovereignty and territorial integrity, even though Russia has occupied 20% of Georgia’s territory for the last decade.

And at his press conference, in reference to the idea of trusting Putin, he stated that it is “not about trust,” but rather about “self-interest and verification of self-interest.”

But the ideas of trust and self-interest go hand-in-hand. Put simply, it is in America’s self-interest that it does not trust Putin as long as he is in power. And due to a recent new law in Russia, he will likely remain in power until 2036.

The one concrete proposal of the summit was that the U.S. and Russia would return their respective ambassadors to each other’s country. But this likely would have occurred on its own apart from a summit.

Both leaders described the meeting as friendly and constructive but in reality, nothing of substance was agreed upon. Putin denied the bold cyberattacks on U.S. institutions and would not even mention Navalny’s name during his press conference.

It remains to be seen if Biden’s tough speech at the summit will translate into tough policies in the future. The Biden administration is still less than five months into its four-year term, and so far, its policies toward Russia have been somewhat inconsistent.

Biden did remove U.S. sanctions on the Nord Stream 2 pipeline, but he did freeze former President Donald Trump’s U.S. troop withdrawal from Germany. He also imposed sanctions on Russia in April for meddling in the U.S. 2020 presidential election, hacking into SolarWinds, committing cyberattacks in general, and continuing to use chemical weapons.

The summit was a reminder that as long as Putin is in power, no summit with a U.S. president will be fruitful. Because as long as Putin remains in the Kremlin, Russia cannot be a credible partner for the United States.