Teachers at Rebekah Randall’s Son’s School Are Fixated on Race. She Wants to Know, ‘What Is the Endgame?’ 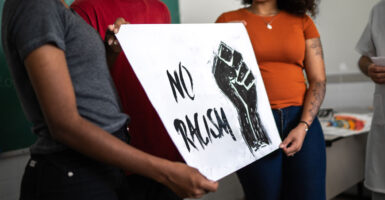 Instead of focusing on academics, teachers are bringing critical race theory and Black Lives Matter ideology into the classroom. (Photo: FG Trade/Getty Images)

A parent of two living in Texas, Rebekah Randall was furious when her son’s teacher implied that the only place her child could learn the answers to cultural questions involving racial identity was at school. They made the “implication that my children would never receive this education in our home,” Randall told me in an interview.

Yet teachers in her son’s school had twisted valuable lessons about treating people the way you want to be treated, Randall explains. They had been “putting race as the most important part of someone’s identity,” one of critical race theory’s main ideas, she says.

“You are racializing children to identify one another,” Randall told her son’s teachers. Her son’s school had put a book list on the school’s website that included “Woke Baby,” which describes an infant stretching in the morning as “reaching for justice” like a “panther” (a not-so-subtle nod to violent activists from the 1960s).

Her son’s teacher wrote the letters “BLM” on the board one day to describe something that inspires her, a reference to the Black Lives Matter movement.

“They have moved away from the academic rigor that they had,” Randall explains, and are focusing on “political correctness.” Her two children, both under 11 years old, “need to be learning academics. They are not to be protesting” in the name of critical race theory, she says.

She pulled her children out of school and found teachers at another school that went “out of their way to say that they are not following critical race theory.”

The media gives us the impression that critical race theory is a harmless idea helping us understand power in the U.S. A CNN columnist describes the theory as merely a perspective that “seeks to understand and address inequality and racism.” Responding to criticism of critical race theory’s ideas, a law professor said recently: “We just want racial justice and equality.”

If critical race theory’s ideas are so simple and righteous, then why would they make parents so frustrated that they would switch schools, like Randall did with her children?

And if the ideas are harmless, then why are some teachers and school officials hiding the content from parents? In Missouri, a teacher encouraged other teachers to take classroom material that promotes ideas such as “white privilege” off school websites that parents can access.

According to materials obtained by Parents Defending Education, the teacher told other educators to “Keep teaching! Just don’t make everything available on Canvas [the school website].” District officials later said the email was not “approved” by school leaders. Yet the internet has a hard time forgetting.

Likewise, in North Carolina, a teacher training program advised teachers to ignore parent input on the subject. One handout from the session attended by educators in Wake County, North Carolina’s largest school system, read, “You can’t let parents deter you from the work.”

For these reasons and more, state lawmakers in Randall’s home state of Texas and elsewhere have been considering proposals to protect children from prejudice in schools.

There is no shortage of cultural questions Americans need to navigate regularly without the problems caused by activists’ obsession with ethnic identities. It is not a sign of cultural progress for parents and policymakers to feel an urgent need to issue reminders that discrimination is not neutral.

Children should not have to spend their days considering how racial bias can be found in every lesson. A reading guide for preschool and kindergarten-aged children available through the Fairport, New York, school district website suggests teachers ask students to describe the skin color of people found on the pages of picture books and ask if it is “fair” for people with some skin colors to appear more than others.

An “antiracist” math curriculum that California educators created asks teachers to adjust homework policies based on students’ skin color. Other school systems have divided students into affinity groups according to race for the purposes of instruction or other school activities.

No one should be forced to participate in such blatant forms of discrimination.

Activists are making sure critical race theory remains in the headlines in the coming weeks. Black Lives Matter at School supporters and protesters from the Zinn Education Project are preparing for “a day of action” in at least a dozen states on June 12. The events are specifically opposing state lawmakers’ proposals meant to protect children from prejudice.

Americans should be under no illusions about the goals of these organizations that support critical race theory. Teachers should be “disrupting the Western-prescribed nuclear family structure,” according to the Black Lives Matter at School website. The late author Howard Zinn wrote that he wanted his revisionist history book, “A People’s History of the United States,” to “awaken a greater consciousness of class conflict, racial injustice, sexual inequality, and national arrogance.”

Critical race theory’s “endgame” is conflict, as Zinn and other theorists describe. The protesters wondering why lawmakers are looking once more for ways to prevent discrimination need only to read their own brochures.

Or, sadly and altogether too often, their child’s homework.