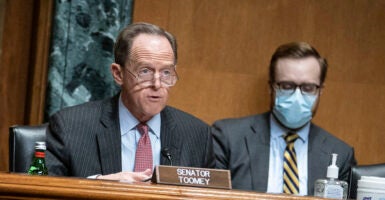 "I would caution you on the reputational damage being inflicted on ... the Federal Reserve as a whole by pursuing a highly politicized social agenda unrelated to monetary policy," says Sen. Pat Toomey, R-Pa., pictured Dec. 10 during a Senate hearing. (Photo: Sarah Silbiger/Getty Images)

Toomey cited the focus of the Fed’s 12 regional banks on “structural racism” as the leading cause of inequality in the United States as part of a series of virtual events titled “Racism and the Economy.”

Toomey, the top Republican on the Senate Banking, Housing, and Urban Affairs Committee, requested documents and a briefing about politically charged issues in letters Monday to the presidents of three of the regional banks. He asked for both no later than June 7.

“Of course, racism is abhorrent and has no place in our society,” Toomey writes, adding:

I recognize the interest in studying economic disparities along  demographic lines, such as race and gender. However, this subject matter is fraught with ideological assumptions and interpretations, and the work and analysis of the … Fed seems heavily laden with political and value judgments.

Toomey addressed his letter to the presidents of three regional Federal Reserve banks: Neel Kashkari in Minneapolis, Eric Rosengren in Boston, and Raphael Bostic in Atlanta.

These three banks spearheaded the webinar series, according to Republican committee staff.

The “Racism and the Economy” series professes to be about understanding “the implications of structural racism in America’s economy and advancing actions to improve economic outcomes for all.”

Racism forms the foundation of inequality in our society, and it threatens our economy and limits economic opportunity for people of color. All 12 district banks of the Federal Reserve System are partnering to highlight the implications of racism in the United States and identify solutions. The reserve banks will host a series of virtual events to examine the ways in which structural racism manifests in America and advance actions to dismantle structural racism.

Toomey said he is concerned that such attention is mission creep for an independent government entity that is supposed to be independent of politics.

“Whether or not this is your personal view, I would remind you that only Congress has the authority to reform the Federal Reserve or modify its statutory mission,” Toomey writes the three bank presidents. “Moreover, I would caution you on the reputational damage being inflicted on the [Minneapolis/Atlanta/Boston] Fed and the Federal Reserve as a whole by pursuing a highly politicized social agenda unrelated to monetary policy.”

“We have received the inquiry from Sen. Toomey’s office, and we look forward to discussing with him how better understanding racial inequality helps the Federal Reserve reach its mandate of maximum employment and ensure economic gains are widely experienced across the population, regardless of race,” Mracek told The Daily Signal in an email.

Boston Federal Reserve Bank spokesman Joel Werkema told The Daily Signal in an email that the bank did not have an immediate response to Toomey. But, Werkema said, “we’ll of course carefully review the correspondence from the senator.”

The Federal Reserve hasn’t been apolitical for sometime, and panels on race are not that different from forums the regional banks would hold hearing demands from pro-union groups, higher education groups, or others, said Norbert Michel, director of the Center for Data Analysis at The Heritage Foundation.

“They’ve been doing this for years,” Michel told The Daily Signal. “They would listen to requests for more education, more job training. The would pledge to do more and pay more attention.”

An article posted on the Minneapolis Fed’s website about one of the “Racism and the Economy” events on April 13 quoted Mary Daly, president of the San Francisco Federal Reserve Bank, as asserting that economics and racism are not separate.

“We’re going to talk about how the practice of economics, the very way we conduct our research, may in fact contribute to, perpetuate, some of the things we’ve seen that horrify us,” Daly said at the event.

Also at that event, the Boston bank’s Rosengren said: “Economics tends to focus on rationality and efficiency. So topics of race, of human behavior that may not be particularly rational or efficient, don’t fit into the paradigm very well.”

Bostic, president of the Atlanta bank, said during the event: “If we don’t know that history, then it’s much easier for an economic modelist to assume, ‘Oh, it must be something about the minorities or the women who they have in their data set,’ and not something where they are a byproduct and really a victim of those earlier decisions.”

Axios reported that Bostic, who broached “lump sum reparations” as a remedy for inequality, is widely considered as a possible next chairman of the U.S. Federal Reserve if President Joe Biden doesn’t reappoint Chairman Jerome Powell when his term expires next year.

In an interview with Axios, Bostic talked about the need to counter historical discrimination that has disdvantaged black, low-income, and rural Americans.

Powell has signaled support for flexible standards in determining policy to allow some inflation in order to increase employment that would address racial concerns.