The Right Way to Fight Racism 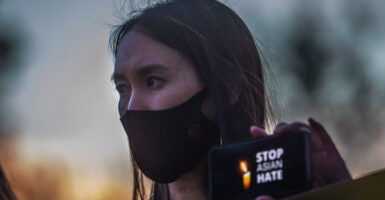 A woman holds up her phone at a March 17 candlelight vigil in Garden Grove, California, against the recent spate of violence targeting Asian Americans. (Photo: Apu Gomes/AFP/Getty Images)

Members of Congress, including several Asian Americans, surely meant well when they drafted a bill against hate crimes committed against Asian Americans. Alas, it’s a hollow political victory for one side, rather than real progress toward justice.

The COVID-19 Hate Crimes Act focuses on strengthening law enforcement efforts against hate crimes related to the coronavirus and on providing guidance on racially discriminatory language.

But when they had an opportunity to do something tangible to reduce discrimination against Asian Americans, Senate Democrats defeated an amendment that would have prevented college admissions officers from using race to penalize Asian Americans.

Instead of unrigging a system of legal discrimination that clearly hurts Asian Americans as well as those it purports to help, those lawmakers decided on a symbolic measure that signals virtue, rather than one that advances justice.

“Hate crime” penalties seek to protect minorities. But there’s no evidence that increasing a perpetrator’s penalty because of the victim’s race actually prevents crimes based on race.

Furthermore, it devalues the lives of those who don’t belong to a category seen as one of the victims. And when an Asian American is attacked for a motive other than race (e.g., money), the harm is felt no less, but the perpetrator receives a lighter sentence.

That means that people must be treated as individuals, not members of a racial group.

That might not be what critical race theory teaches, but it’s the right idea. Women and people of color were not among the drafters of the Declaration of Independence in 1776, as critical race theorists remind us, but the promise of equality and inalienable human rights has benefited women and men of every skin color.

And the hope of impartiality was what Martin Luther King Jr. inspired Americans with during the dark days of racial segregation, when the legal, economic, and social systems were rigged against black Americans.

Impartiality is not the same thing as “not seeing race.” It’s seeing an individual, including his or her race, but not reducing him or her to the boxes we think he or she checks. Treating each other with impartiality is how Americans can make true progress against prejudice. Each American has his or her personal experience with race.

Like many other Asian Americans, racism is not new to me. I was born in America, but strangers have told me to go back to where I came from. And last year, as Asian Americans experienced an increase in racial slurs and violence, ugly scratches appeared on my car.

I couldn’t shrug off the suspicion that it was motivated by racism.

The nightmarish violence has made me and many other Asian Americans fearful and angry. But I don’t actually know who scratched my car or what his or her motive was.

I know that some people scapegoat everyone with Asian features, rather than the Chinese Communist Party. But did the person who “keyed” my car bear a racial animus against me? I can’t be sure of that. In any case, what good would it do to see myself as a perpetual victim of racism, especially since I would just as often be wrong as right?

It has been particularly painful to see the most vicious members of society attack the most vulnerable, especially the frail and elderly.

They led a lament for all those who lost their lives. Rather than siding with the perpetrator because of his race, white Americans joined Asian Americans and those of other races to ask God for justice and redemption.

The suspect said his motive was not racial animus, but rather a twisted desire to eliminate sexual temptation. The truth may never be known, but those who grieved were from many races.

We must all agree with The Boston Globe columnist who recently wrote that Asian Americans should be seen as who we really are; namely, Americans and not foreigners in our own home.

In fact, all Americans should be seen as who they really are. For that to happen, we must see each other as individuals, not members of racial groups.

Fortunately, that happens. Almost every person who has sought to hire, promote, or mentor me has been of a different race. I don’t know how they viewed my race, but they evaluated me according to my individual strengths and weaknesses. Now that I’m in a position to hire, promote, and mentor, I seek to understand each person’s unique talents, strengths, and potential.

I should not be prejudged by the color of my skin or my last name, nor should anyone else. Those who think that racism is systemic may think this is naive, or even that I have “false consciousness” and fail to perceive the systemic nature of racism. But I’m not unconscious to racism. Rather, I’m just conscious that we’re all susceptible to it.

“The line dividing good and evil cuts through the heart of every human being,” Aleksandr Solzhenitsyn wrote of his own experience in the Soviet gulag, where soldiers beat and starved him because of his political and religious beliefs. But he resisted the temptation to demonize them.

With honesty and moral clarity, he recognized his own heart was not immune to the temptations of hate and evil. None of us are. No individual and no country is above it. America isn’t. And China isn’t, either, as the persecution of Uighur Muslims has made all too clear.

Instead of evaluating us as individuals with moral responsibility for our own choices, critical race theory, which is being institutionalized across America, reduces people to the color of their skin, prejudging all whites as beneficiaries of systemic racism and exonerating all non-whites from racist motives and actions. But using race as a proxy for guilt and innocence is a fundamentally flawed idea.

Human beings aren’t that simple. Each of us is capable of making good or bad choices, and we should be held responsible for the choices we make, not the ones that previous generations made.

The path out of racial discrimination is through knowing one another and being known, as individuals.