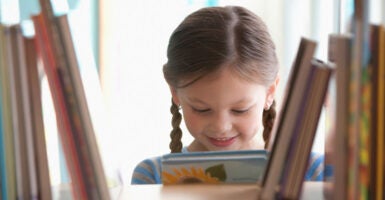 Low-income families in Pennsylvania’s lowest-performing school districts could gain access to tuition assistance for private schools as part of a reform package.

Pending legislation would create education savings accounts, into which the state could deposit funds that parents may use to buy education products and services for their children. Such accounts can make private schooling options more affordable.

The proposal also would expand existing tax credit programs that provide students with tuition assistance in the form of scholarships.

“Once this bill moves forward and passes, Pennsylvania is going to be a model state for educational opportunity,” state Rep. Andrew Lewis, a Dauphin County Republican and lead House sponsor, said in an interview with The Daily Signal.

The dollar amount for education opportunity accounts, or EOAs, would be based on average state funding per student, minus transportation costs. The most recent data available, from the 2018-2019 school year, indicates this would be about $6,500 per student.

Eight other states currently offer similar accounts to provide parents with more control over their tax dollars as they choose the education they believe is right for their children.

“This year, there has been an unprecedented number of new education options created for children around the country, including new education savings accounts in West Virginia, Pennsylvania’s neighbor,” Butcher told The Daily Signal, which is Heritage’s multimedia news organization. “These programs offer hope for families and their students, something children desperately need after the past year.”

In Pennsylvania, education opportunity accounts figure into a larger set of reforms that would build on existing initiatives in public and private school choice.

The House version of the bill, for instance, would create a “statewide charter authorization board” so local school districts that may have an incentive to block new charter schools do not have as much leverage as they do now.

The bill also would expand tax credit scholarships that make private education possible for low-income families and eliminate ZIP code requirements so that Pennsylvania students aren’t assigned a public school based only on where they happen to live.

Marc LeBlond, a senior policy analyst with Commonwealth Foundation, a free-market think tank in Harrisburg, Pennsylvania, told The Daily Signal that he sees a “strong potential” for school choice initiatives to create new markets for Catholic and other Christian schools.

“Because these schools are mission oriented, they tend to operate on a shoestring with limited funding,” LeBlond said. “They put their emphasis on academics and rigorous learning, but their resources are limited. The introduction of education opportunity accounts and expanded tax credits could put a serious dent in existing waiting lists and incentivize private schools to accommodate the enrollment demand we know is out there.”

Two Pennsylvania programs, the Educational Improvement Tax Credit and Opportunity Scholarship Tax Credit, enable businesses and community leaders to contribute to scholarships for private schools in exchange for tax credits that can be applied against their tax liability that year.

But the existing programs are limited by caps that prevent donors from receiving the tax credit past a certain donation amount. Last year, for instance, 43,000 student applicants were denied scholarships while more than $121 million in donations to both programs were left on the table, according to a state House memorandum detailing the proposed reforms.

Since the COVID-19 pandemic began last year, 40 students have transferred to the school, Smith said, surmising that awareness of the need for school choice has increased because of the pandemic’s effect on in-person classroom education in public schools.

In hearings last month before the state Senate Education Committee, Smith informed legislators that 51% of Bishop McCort students receive funding from the two tax credits while 14% were unable to receive any funding, despite qualifying.

Tuition at Bishop McCort is $6,995 per year, Smith testified, which he said is 60% less than the nearby public high school spends per student.

State Sen. Scott Martin, a Lancaster County Republican who chairs the Senate Education Committee, expressed his determination to advance an education reform package that can pass the Pennsylvania General Assembly.

“We’re looking to strike a balance between what we would really like to do, and what we can get passed at the end of the day,” Martin told The Daily Signal. “The education opportunity accounts and the elimination of ZIP codes would be more controversial than, say, the expansion of tax credits.”

Aaron Chapin, vice president of the state’s largest teachers union, the Pennsylvania State Education Association, acknowledges that public schools received “an unprecedented amount of federal financial support” to address the fallout from COVID-19. However, Chapin testified to lawmakers, he is concerned about “outside for-profit entities marketing questionable products or services.”

The Daily Signal sought comment from the teachers union’s press office on whether the union had taken a position on recently proposed school choice initiatives. The union had not responded as of publication.

If the legislation passes, Bishop McCort High School’s principal said, he envisions a scenario where Catholic schools might open up more space in existing buildings or reopen closed schools to meet an influx of students funded by scholarships.

Parents and students who are new to Bishop McCort say they see a palpable difference between their current and prior educational experiences. In November, Armagh resident John McMullen transferred his son Owen to the Catholic high school, where he is now a seventh grader.

“The remote education just wasn’t working in his old school,” McMullen said. “Owen was literally done after just 10 minutes a day for what was supposed to be an eight-hour school day. But here at McCort they have a 100% graduation rate and the students have to work hard to maintain their grades.”

McMullen said he is keen on the idea of lawmakers opening more education opportunities across the state.

“I’m an American by birth and this is a free country, and you should be able to send your kids wherever you like,” he said. “I don’t think it’s right that the public school system gets all the financing.”

If the Legislature passes an education reform package but Gov. Tom Wolf, a Democrat, declines to sign it at the behest of union benefactors, the bill still could become law.

“The education reforms could simply lapse into law without the governor’s signature,” said Lewis, the lead House sponsor. “So there’s a scenario where he doesn’t veto and doesn’t sign and it still becomes law.”

The teachers union’s Political Action Committee for Education spent more than $2 million in the 2020 election cycle, according to campaign finance records. Since 2010, the union’s PAC has also donated about $2.4 million to the governor.

The Pennsylvania State Education Association is an affiliate of the National Education Association, the country’s largest labor union, with almost 3 million members. NEA has a long history of opposing school choice initiatives, according to Influence Watch, a project of the Capital Research Center.

Martin, the Republican who is chairman of the Senate Education Committee, is also a lead sponsor of the Senate version of the bill. He said he is crafting it with an eye toward what can become law.

“Right now I have families in various parts of the state that are looking for opportunities for their kids, especially coming out of last year where their schools wouldn’t open,” Martin said.

“It would be easy to ramrod through a political statement and have the governor veto it,” he said. “But then if families get nothing in terms of expanded opportunities, I wonder if I’ve really done my job. I’m not going to put something together that won’t move out of the Senate.”