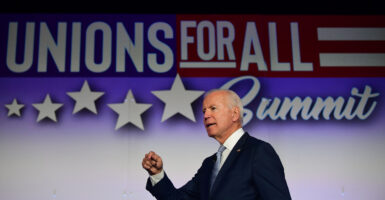 Joe Biden, seen here Oct. 4 campaigning for president at the Service Employees International Union's "Unions for All Summit" in Los Angeles, is paying back his union supporters with a White House task force on “Worker Organizing and Empowerment.” (Photo: Frederic Brown/Agence France-Presse/Getty Images)

Rusty Brown is the national outreach coordinator for the Freedom Foundation and was a policy adviser for the Department of Labor under the Trump administration.

With little fanfare, President Joe Biden on April 26 signed yet another executive order, this one establishing a White House task force on “Worker Organizing and Empowerment.”

Implicit in its title is the leftist core belief that individual workers aren’t smart enough to know what’s good for them, so the government is going to intervene.

In this case, Americans aren’t choosing to join labor unions on their own, so the government will help them see the light.

Since the turn of the 20th century, the labor movement has been quite successful in eliminating the workplace challenges that led to its creation. In a sense, unions worked themselves out of usefulness.

In essence, modern unions are a business that sells memberships, but with a caveat. Much of the money members pay doesn’t actually go toward the services unions sell, but rather toward getting politicians to enact laws that give union officials more power, including to extract membership dues from workers against their wills.

Unions are failing businesses that would be dead already if not for the profound corruption and political entanglement keeping them afloat.

From underhanded legislation to Cabinet nominations, Biden has already overachieved on his promise to be the “the most pro-union president you’ve ever seen.”

For the unions, that’s a wonderful thing. But for the workers they claim to represent and the taxpaying public as a whole, not so much.

Now, he’s creating a task force to bring the full weight of the federal government to bear on private and public sector employees across the country to join unions and help fund the Democrats’ machine.

The task force is co-chaired by Vice President Kamala Harris, who elevated California’s Service Employees International Union president to a senior adviser role in her short presidential campaign, and by Labor Secretary Marty Walsh, a former union organizer from Boston. The remaining members include more than 20 Cabinet officials and acting heads of government agencies with close ties to Big Labor.

That’s a full-throttle approach to exploring opportunities each agency might have to further tip the scales in favor of unions with an emphasis on women and people of color, on “difficult-to-organize industries,” and on expanding membership in the federal government.

According to a White House fact sheet, the task force is needed because labor union membership has been declining for half a century and now sits at a mere 10.8% of all American workers, with the majority of those being government employees.

A commonly parroted pro-union pitch is that union members earn on average 13% more than their nonunion counterparts, which is a gross misrepresentation of facts.

In January, the Bureau of Labor Statistics put out a chart breaking down wages by industry and occupation, comparing union vs. nonunion in 2019 and 2020.

The chart does show that many industries and occupations offer higher average wages for union members (though not exclusively), but completely ignores the fact that those in supervisory roles and management, where wages are highest, are not eligible for unionization.

When workers are compensated arbitrarily, rather than tying wage increases to economic forces like supply and demand, it simply forces the cost of everything else to increase, too, leaving the worker no better off than he or she was before.

In addition, union membership generally costs workers somewhere around 3% of their gross income, so just becoming a union member shaves that right off the top.

Another major, but rarely discussed, reason for union membership decline is modernization of the American workplace. It was once common to build a 40-year career, then retire from the same company. Now, this is rare outside of the government sector, which is heavily unionized, and where employees are almost never fired and money is no object.

Anyone who’s ever dealt with the government has a story of frustration, and unions are often the cause because they remove the incentive for employees to actually do quality work.

Employers seek out talented employees and create an environment conducive to productivity, but unions reward just the opposite.

Unions stand in the way of a direct relationship between employers and employees, and seek to establish a hierarchy based on seniority rather than merit, while actively discouraging their members from going into management, because the unions wouldn’t be able to protect them anymore.

In fact, unions are worried about losing dues revenue.

In the forming of his task force, Biden did something seldom seen by career politicians: He said what he meant.

The task force was formed to explore ways for government to ensure unions revenue that they’re incapable of garnering on their own. The project is a slap in the face to Americans and a prime example of liberal politicians claiming to be looking out for the people, when they are actually paying off their friends who promise to help get them reelected.