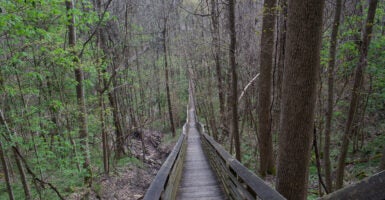 The Biden administration on Thursday released its preliminary report on the president’s so-called 30 by 30 conservation initiative.

Initiated in Executive Order 14008, President Joe Biden directed the Department of the Interior to develop a plan to conserve “at least 30 percent of our lands and waters by 2030” in collaboration with the departments of Agriculture and Commerce.

Framed as a “starting point” and “first step,” the report, “Conserving and Restoring America the Beautiful,” lacks important details. It’s hard to evaluate, let alone buy into, a broad vision statement on an issue that has been deeply contentious for generations and the approach to which acutely affects the lives of many Americans.

Nobody, either on the left or the right, has a monopoly on caring about the environment. But there are deep disagreements about how to do that, and to date, the Biden administration’s actions have not inspired much confidence.

However, there are some promising acknowledgments.

For example, the report also brings some clarity to how the administration is thinking about conservation when it states:

[T]he president’s challenge specifically emphasizes the notion of ‘conservation’ of the nation’s natural resources (rather than the related but different concept of ‘protection’ or ‘preservation’), recognizing that many uses of our lands and waters, including of working lands, can be consistent with the long-term health and sustainability of natural systems.

That clearly makes room for a broader and more dynamic approach to stewardship, rather than a highly restrictive and problematic interpretation to leave land in an inaccessible wild state.

The report’s “central recommendation” is to put forward eight core principles for the “30×30” initiative. At face value, they show promise:

1) Pursue a collaborative and inclusive approach to conservation.

2) Conserve America’s lands and waters for the benefit of all people.

4) Honor tribal sovereignty and support the priorities of tribal nations.

8) Build on existing tools and strategies with an emphasis on flexibility and adaptive approaches.

In many ways, they reiterate conservative principles for stewardship of lands. Principles like Nos. 3, 4, 5, and 6 are glimmers of what get conservatives excited.

Land management policies that are site- and situation-specific and that respect the role of private property owners empower states and communities to work with incentives to achieve durable stewardship.

Time and again, property rights have turned environmental resources into assets rather than liabilities, and markets have led to more creative and desirable solutions. Americans have achieved creative compromises by relying on the people who will directly benefit from wise management decisions or be marginalized by poor ones.

So much for the promising stuff. Much remains to be seen, and actions speak far louder than the words in a vision statement. Everyone cares about lands, but process matters.

Yosemite illustrates the point that the administration’s vision statement is good, but it’s far from clear how it will play out. That’s where the rubber hits the road as the administration applies those eight principles.

Will the administration be willing to address regulatory issues that are root problems? As the Yosemite example unfortunately underscores, conserving 30% of American lands by 2030 means nothing if we do not acknowledge that the tools to steward them are broken.

Will the administration welcome the already numerous, dynamic ways states and local landowners are solving problems through market tools that don’t look like the more heavy-handed tools of the extreme left—or will it just pay lip service?

Private property owners, nonprofit groups, and states have truly been the engines of innovation for stewardship of the environment.

Not all land needs to be federally owned and managed to be “conserved,” but that’s an idea that the far left is skeptical of, if not outright resistant to. How will this be incorporated into the baseline defining how much land the administration already considers “conserved”?

What, also, of equity? The federal government owns more than 50% of each of five states, and the vast majority of federally owned land is west of the Mississippi River.

Unfortunately, the Biden administration already has engendered mistrust in its first 100 days. For instance, while the policy statement acknowledges that “working lands” can have a role in sustainable land management, the administration’s actions to date have been directly contrary to that conviction.

The administration’s vision document also expresses a desire for durable policy reform, a laudable and necessary goal. But it’s hard to see how durable change can happen without Congress.

These are all issues where the rubber hits the road on federal land management policy, and there are many tools available to Congress and the administration.

There is much that’s yet to be seen in the president’s “30×30” initiative, and Americans should hold the administration accountable to the principles it has initially laid out. America won’t be “the beautiful” if it isn’t also free.