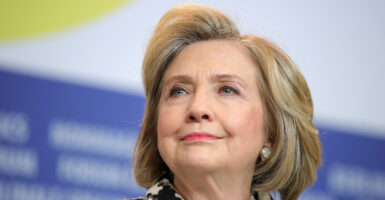 I recently came across the term “white savior movies.” According to critics, this is a type of film that features a white hero or heroine entering the life of a helpless, troubled, often clueless black person and, as one black critic puts it, “swoops in” to turn his or her life around.

In an article called “Top 5 Most Cringeworthy White Savior Films,” a critic named OnlyBlackGirl offered this definition: “If you’re not familiar with the ‘white savior complex’ it’s basically is when there’s a person or community of color facing some hardship and some white figure swoops in on their kale carpet to save us. Obviously, no person of color can succeed without a pale hand of whiteness reaching down into our broken lives.”

The hit movie “The Blind Side,” starring Sandra Bullock, drew the wrath of many black critics who found it insulting and condescending. OnlyBlackGirl wrote:

Let me just start by saying, I hate everything about this film. I hate how they portray this young man as a stupid Black man incapable of doing anything without being cradled in the white bosom of this lady who kind of forcefully takes pity on him and brings him into her home.

But this is the exact same message and the very narrative that white savior liberal politicians like former presidential candidate Hillary Rodham Clinton, former Texas Rep. Beto O’Rourke, and President Joe Biden have preached for decades. “Systemic racism,” they tell blacks, prevents them from achieving success, unless, of course, they vote for us Democrats to pave the way.

Biden told black radio host Charlamagne tha God, “Well, I tell you what: If you have a problem figuring out whether you’re for me or [Donald] Trump, then you ain’t black.” During the 2012 presidential race, Biden attacked Republican presidential candidate Mitt Romney’s policy of fewer Wall Street regulations as practically tantamount to reinstating slavery.

To a Virginia audience of supporters that included a number of blacks, Biden said: “Romney … said in the first 100 days, he’s going to let the big banks once again write their own rules. Unchain Wall Street. They’re going to put y’all back in chains.”

During the 2020 campaign, O’Rourke rarely missed an opportunity to warn blacks about America’s thicket of contemporary racism that, who knows, with his help, blacks just might be able to navigate.

At a primary debate, O’Rourke said: “Racism in America is endemic. It is foundational.” He said this while flanked by rivals that included a Hispanic man who served in former President Barack Obama’s Cabinet, a black-Indian female who served in the U.S. Senate, and a black man also serving in the Senate.

As for Clinton, she really, really feels blacks’ pain. In her best “black accent,” Clinton, in a 2007 speech in Selma, Alabama, said: “On this floor today, let us say with one voice the words of James Cleveland’s great freedom hymn: ‘I don’t feel no ways tired. / I come too far from where I started from. / Nobody told me that the road would be easy. / I don’t believe he brought me this far to leave me.'”

Never mind what Edward Rodrigue and Isabel Sawhill of the center-left Brookings Institution call the “success sequence”: “Graduate from high school, live in a family with at least one full-time worker, and wait to have children until you are married or at least are in a committed partnership with another adult.” To this formula, economist Walter Williams added, “And be a law-abiding citizen.”

But white savior politicians like Biden, O’Rourke, and Clinton tell blacks that America’s “systemic racism” means the success sequence does not apply to them. About white savior films, OnlyBlackGirl said, “Obviously, no person of color can succeed without a pale hand of whiteness reaching down into our broken lives.”

But the “pale hand” of white savior Democratic politicians who sell blacks the same insulting, condescending message does not provoke the same outrage. It should.