How TSA Explains Allowing Illegal Immigrants to Fly With You 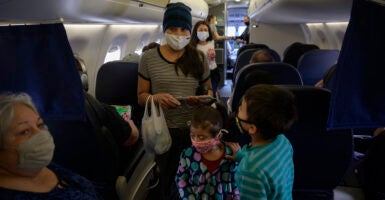 Illegal immigrants from El Salvador board a March 30 flight from Houston to New York after their release from a U.S. government holding facility for illegal aliens seeking asylum in McAllen, Texas. (Photo: Ed Jones/AFP/Getty Images)

The Transportation Security Administration has an “established process” for identifying illegal immigrants who board domestic flights to a new home in America, a spokeswoman told The Daily Signal, although the Biden administration formally refers to this population as “undocumented.”

The TSA was responding to a Daily Signal report Friday about such commercial flights carrying illegal aliens—specifically one that departed McAllen International Airport in Texas the day before—and the security waiver necessary for them to board without showing required identification.

Amid the new surge of illegal immigrants at the southern border, the Biden administration has facilitated putting some of them on flights to cross the United States to new destinations at taxpayers’ expense.

Although they are in the United States without government-recognized documentation after unlawfully crossing the border, the federal government allows groups of illegal immigrants to go through TSA security checkpoints in airports.

In an email Saturday to The Daily Signal, spokeswoman Patricia Mancha wrote:

The Transportation Security Administration (TSA) has an established process to verify the identity of individuals who have received a Notice to Appear from U.S. Customs and Border Protection (CBP) and are ticketed for travel on a commercial airline.

TSA will continue to coordinate with CBP and use resources available to the agency to confirm the identity of every traveler to ensure that transportation security is not compromised.

These include the I-94 form for international travelers visiting the United States legally.

The TSA spokeswoman also cited the I-862 form, which is a Department of Homeland notice to appear in immigration court for illegal immigrants who have been released from detention.

Historically, many illegal immigrants who are released into the country don’t face a hearing in immigration court for months or years.

Mancha also referred to Form I-385, a so-called Alien Booking Record used by U.S. Immigration and Customs Enforcement. This document could include information obtained from the arresting or delivering officer such as name, sex, age, date of birth, birthplace, country of citizenship, and medical issues.

However, many illegal immigrants are released into the U.S. soon after being apprehended at the border, said Mark Morgan, Acting Commissioner of U.S. Customs and Border Protection during the Trump administration after serving a short stint running Immigration and Customs Enforcement.

“There is no way to 100% guarantee the identity of everyone coming across our borders illegally, especially when law enforcement organization’s facilities are dangerously overcrowded and are being pressured to release them as fast as possible,”   Morgan said of the illegal immigrants caught at the border. “The room for fraud is wide.”

Morgan was on an American Airlines flight Thursday out of the McAllen airport when he saw 14 illegal immigrant families or groups board the plane.

An “established process” for non-illegal aliens exists for the TSA, on a case-by-case basis, to allow individuals to fly even without identification, but they must undergo a lengthy individualized screening process before eventually being allowed to board a flight to their final destination. This would include those whose identification was lost, forgotten, or stolen.

“And it’s one thing to do a one-off for an American citizen where there are numerous ways we can verify someone’s identity through a network of U.S. controlled and operated systems vs. a systematic ‘waiver’ for an entire class of individuals—where no such equivalent verification systems exist and with no limit or end in sight,” Morgan told The Daily Signal.

Driven by the new border crisis, Customs and Border Protection facilities have released some families who unlawfully entered the country to nongovernmental organizations and coordinated efforts to transport them, Morgan said.

These NGOs receive federal, state, and private funding, so taxpayers indirectly pay for the flights.

The flights occurred during previous administrations, including the Trump administration, when detention facilities for illegal aliens were packed. But this process has accelerated with the current surge at the border, which critics have attributed to President Joe Biden’s rhetoric.

The Department of Homeland Security and the TSA, which is part of that agency, did not respond to numerous inquiries from The Daily Signal before it published the initial report Friday. The White House also did not respond to requests for comment.

Illegal immigrants, interviewed in recent news accounts, said they crossed the U.S.-Mexico border anticipating more accommodating policies from the new president. Fewer than 20% of illegal immigrants that encounter Customs and Border Protection agents have a credible claim that they fear conditions in their home country, according to government data.