Republican Governors Are Signing Pro-Life Laws All Across Country 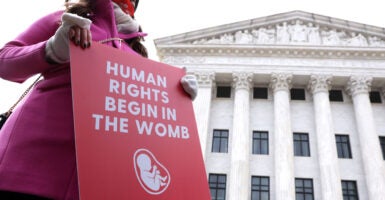 A pro-life activist holds a sign outside the U.S. Supreme Court during the 48th annual March for Life Jan. 29, 2021, in Washington, D.C. (Photo: Alex Wong/Getty Images)

Republican governors across the U.S. are ramping up pro-life legislation as President Joe Biden continues to expand abortion access.

The newest pro-life laws have been signed this week in Arizona, Oklahoma, Montana, and Idaho.

On Tuesday, Republican Arizona Gov. Doug Ducey signed SB 1457 into law, legislation banning abortions based on a diagnosis of genetic abnormality like Down syndrome.

“Every life holds immeasurable value—regardless of genetic makeup,” Ducey tweeted. “Today I signed legislation to prioritize life in our preborn children and protect those with genetic abnormalities. Arizona remains among the top pro-life states in the nation, and my sincere thanks goes to Senator Nancy Barto for her leadership and work on this life-saving issue and to those who supported this bill.”

Every life holds immeasurable value — regardless of genetic makeup. Today I signed legislation to prioritize life in our preborn children and protect those with genetic abnormalities. 1/

Republican Idaho Gov. Brad Little signed HB 366 into law on Tuesday as well, banning abortions after an unborn baby’s heart can be detected. A baby in the womb is capable of feeling pain as early as 12 weeks or by at least 20 weeks gestation, according to the Charlotte Lozier Institute.

The Oklahoma governor signed HB 2441, HB 1102, and HB 1904 into law Monday. These bills ban abortion after a baby’s heartbeat can be detected, classify a doctor performing an abortion as “unprofessional conduct,” and require that doctors who perform abortions must be certified in gynecology and obstetrics.

“Today, we took action to protect the most vulnerable among us: the unborn,” Gianforte said Monday afternoon. “There were many who served in this building before us who championed the unborn, people who worked hard to advance the cause for life. Unfortunately, their efforts were vetoed. Not today.”

The slew of pro-life legislation comes as Biden’s administration continues to expand access to abortion throughout the country.

Marching to Gov. Ducey’s office to deliver petition signatures
“Hands off AZ my body belongs to me” pic.twitter.com/j32cLNXXOZ

The new president promised within the first few days of his administration to revoke the Mexico City policy, which prevents federal funds from going to abortions abroad, and vowed to make Roe v. Wade the law of the land.

Earlier this month, the Biden administration announced it is lifting the Food and Drug Administration’s former restrictions on abortion drugs, allowing the abortion pills to be delivered by mail during the coronavirus pandemic.