Democrats’ Court-Packing Schemes All About Power 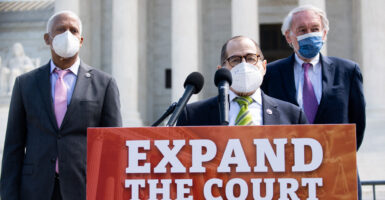 Rep. Jerry Nadler, D-N.Y., speaks April 15 with the Supreme Court as a backdrop to outline a bill to expand the number of seats on the high court from nine to 13. Nadler is flanked by Rep. Hank Johnson, D-Ga., left, and Sen. Ed Markey, D-Mass. (Photo: Saul Loeb/ AFP/Getty Images)

The Democrats’ plans to pack the Supreme Court appear to be getting serious.

Left-wing proposals to put more justices on the Supreme Court have been floated for years. Now that Democrats have taken power, they’re putting those plans in motion.

A group of powerful congressional Democrats recently unveiled legislation that would expand the Supreme Court from nine to 13 justices.

“The Democratic bill is led by Sen. Ed Markey of Massachusetts and Rep. Jerry Nadler of New York, the chair of the House Judiciary Committee,” reported NBC News. “It is co-sponsored by Reps. Hank Johnson of Georgia and Mondaire Jones of New York.”

If the bill became law, it would be the first time the Supreme Court increased in size since the Civil War era.

“We are not packing the Supreme Court, we are unpacking it,” Nadler said.

Was he grinning under that COVID-19 mask?

House Speaker Nancy Pelosi, D-Calif., said that she wouldn’t bring the legislation up to vote, but such a scheme may have support coming from the White White.

President Joe Biden is taking his own crack at court-packing too.

During his presidential campaign, Biden mentioned during a “60 Minutes” interview that he might create a commission to look at expanding the size of the Supreme Court, but he was extremely vague about what he actually wanted from it.

When pressed about what he intended to do, Biden essentially said that you’d have to elect him to find out what’s in the plan.

Now it has become clear that the Biden administration is at least putting the idea on the table.

In early April, Biden signed an executive order creating a commission that would look at a way to “reform” the Supreme Court. Unsurprisingly, it’s filled with scholars who’ve advocated court-packing.

It’s hard not to see the Biden commission, along with the legislative push from powerful members of Congress, as not a serious threat to the high court’s independence.

It’s important to note that the court-packers have failed to really explain why it would be better to have more Supreme Court justices.

Nadler argued that Senate Republicans have “packed” the courts in recent years—as in they’ve filled vacancies on federal courts, an entirely normal part of the American political process for the party that controls the White House and Senate.

The New York Democrat also said the Supreme Court must grow as the country has grown, but this is an odd way to talk about courts.

Quite importantly, the courts are not meant to be representative bodies beholden to constituents. They exist to interpret laws passed by legislatures.

Intentionally or not, Nadler exposed what’s fundamentally wrong with the court-packing plans. They in effect would treat courts as if they are just another legislative body.

Nadler, that master of incisive argumentation, said at the press conference that court-packing, er, unpacking, is needed to “restore balance to the nation’s highest court after four years of norm-breaking actions by Republicans led to its current composition.”

What this means is that Democrats have lost some elections and failed to get Supreme Court justices nominated and confirmed by the Senate.

In order to restore “norms,” meaning Democrats’ power over institutions, Nadler and the unpacking crew intend to shatter the long-standing norm of limiting the Supreme Court to nine justices to make sure Democrats can get decisions they want on the court.

And that’s what this effort is really about. From the Biden commission to the legislative plan to pack the Supreme Court, it is all too apparent that this is just a method of getting decisions they like.

That’s the case whether Democrats succeed in packing the Supreme Court or not. The plan at least operates as a threat to those currently on the court that if the justices stand athwart democracy, or the Democrat Party, in upcoming decisions, the politicians might just put a few more justices on the bench who will make the decisions they want.

In many ways, what’s happening mirrors the court-packing schemes of President Franklin D. Roosevelt in the 1930s. FDR threatened to put more justices on the high court in response to the current justices’ striking down some of his New Deal programs.

Despite overwhelming Democrat majorities in both the House and the Senate at the time, Congress overwhelmingly rejected the Democrat president’s call to put more justices on the Supreme Court.

As Thomas Jipping, a legal expert at The Heritage Foundation, noted, today’s court-packing scheme is being carried out with a motive similar to FDR’s: Push the court to carry out the favored political agenda.

It seems Democrats in Congress are a little less hesitant to threaten the structure of the Supreme Court than they were in the 1930s.

And this goes to what we’ve seen from Democrats and the left in general since Biden took office. It seems their agenda mostly revolves around securing power rather than promoting a specific program.

From court-packing, to HR 1 election “reforms” that would nationalize and damage our electoral process, to granting statehood to Washington, D.C., this all seems to be following the same script.

Most of what we’ve seen so far from the left since it amassed a narrow margin of national political power in the November election has been a series of steps meant to increase and make that power permanent.

It’s natural for political parties to seek greater power and ability to make policies conform to their agenda. But what makes this so concerning is how Democrats are attempting to change the rules of the political system simply to serve their cause.

Supreme Court Justice Stephen Breyer, who was nominated by President Bill Clinton, a Democrat, condemned this path. In a speech at Harvard, he said our courts rely on the public’s belief that “the court is guided by legal principle, not politics.”

It appears that the modern left simply doesn’t care.

The attempt to pack the Supreme Court is the most brazen and obvious effort to do this. It certainly may lead to short-term “gains” for the left, but the end result would be that the Supreme Court and other federal courts are subject to constant packing as the political parties take and lose power.

Congress already has relinquished much of the legislative burden to independent executive and legislative agencies. It would be shameful and destructive to heap more of this inappropriate role on the courts too.

Carrying on in this way will damage the efficacy of the republic and tear away safeguards to our liberty.

That may be the point. But Americans who still believe in preserving even a shred of our constitutional system should be contemptuous of those making such a naked power grab.