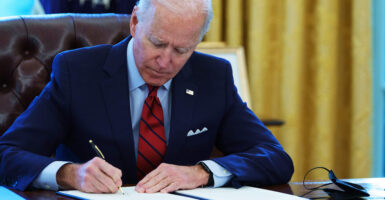 Sarah Stewart is a 2020 graduate of Liberty University’s Master of Divinity program and of the Academy of The Heritage Foundation’s Young Leaders Program.

The Biden administration certainly has been rushing to implement executive orders to undo the policies of President Donald Trump.

One unintended consequence of those actions is the possibility that your tax dollars are going to organizations that are complicit in coerced abortions overseas. One can only hope that this consequence of recent executive orders was indeed unintended.

In his first three months in office, President Joe Biden has issued a bevy of executive orders on social policy. One of those orders rescinded the Mexico City policy, which had been reinstated and expanded under the Trump administration.

This policy, first enacted by President Ronald Reagan in 1984, sought to close loopholes in existing laws to bar nongovernment organizations receiving U.S. funding from engaging in activity promoting or participating in abortions overseas. It has been rescinded and reinstated by successive Democratic and Republican administrations.

Trump not only reinstated the policy, but strategically expanded it to apply to even more funding streams as well. While the Mexico City Policy recently made headlines again when Biden rescinded the policy, what largely went unreported was that Trump’s expansion was removed along with the original policy.

Trump’s order added the language: “I direct the Secretary of State, in coordination with the Secretary of Health and Human Services, to the extent allowable by law, to implement a plan to extend the requirements of the reinstated Memorandum to global health assistance furnished by all departments or agencies.

“I further direct the Secretary of State to take all necessary actions, to the extent permitted by law, to ensure that U.S. taxpayer dollars do not fund organizations or programs that support or participate in the management of a program of coercive abortion or involuntary sterilization.”

While previous iterations of the policy attempted to curtail coerced abortions, the Trump administration expanded the scope of the executive branch’s ability to enforce the order.

Under authority granted by the Kemp-Kasten amendment to annual State and Foreign Operations appropriations legislation, the president may invoke the amendment to “any organization or program which … supports or participates in the management of a program of coercive abortion or involuntary sterilization.”

Since Kemp-Kasten’s first inclusion in State and Foreign Operations appropriations legislation in 1985, it has been invoked under Republican administrations to withhold funding from the United Nations Population Fund due to the organization’s complicity in China’s coercive family planning activities.

In a one-sentence negation, Biden has taken away this protection from women abroad. His order artlessly rescinds the Mexico City policy, which is a significant resource for preventing funds from going to organizations that assist with coerced abortion.

When Trump’s expansion of the law was originally announced, pro-abortion advocates decried it as an excessive restriction of “choice.” The executive director of Planned Parenthood Global, Latanya Mapp Frett, called it “radical,” saying, “all I could feel was a sense of dread.”

Introspection should then prompt one to ask: Did prior funding go to coerced abortions and sterilizations, and was it stopped under the Trump administration? In fact, the State Department in 2017 did act to remove funding from the U.N.  Population Fund, stating that it had given assistance to such efforts in China. The Population Fund denied the claims, but the State Department found that the organization had assisted China with its “two-child policy.”

The Planned Parenthood Federation of America, whose website states that it does not support the two-child policy, finding it to be against “reproductive self-determination,” has also defended the U.N. Population Fund.

Despite its statement on the two-child policy, the International Planned Parenthood Federation continues to have as one of its partner organizations the Chinese Family Planning Association, which helps facilitate the two-child policy in China, along with other forced reproductive procedures, such as sterilization.

While it would be preferable that the Mexico City policy in its entirety be reinstated, terminating funding to organizations that assist with forced or coerced procedures should be an area of bipartisan agreement.

For those who argue for abortion on the basis of “choice” and self-determination, forced procedures are the antithesis of what they claim they defend. No woman should ever forcibly have her child taken from her, and no woman should ever suffer the indignity of forced sterilization. Subjecting women to such treatment is a grave human rights abuse.

Taxpayers should not be forced to subsidize those atrocities directly or indirectly. Congress should act to eliminate this loophole permanently, and it should put in place strict accountability measures to ensure that no taxpayers ever need be concerned that their tax dollars are funding China’s human rights abuses or similar abuses in any other nation.

Organizations and nations that wish to receive Americans’ hard-earned tax dollars should be held to a high standard of accountability.

The failure of the Biden administration to protect the tax dollars of Americans is one more example of the current administration’s refusal to hold China accountable for its human rights abuses.

Our representatives—in both parties—should seek to counteract this untenable outcome of a rush to implement policy through executive action.