CBO Has Made Important Progress in Transparency, but Additional Steps Needed 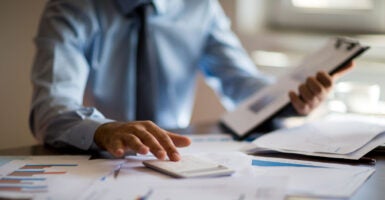 The Congressional Budget Office has taken several steps to make its work more transparent and accessible to the public. (Photo: idvan_celik/Getty Images)

In response to constructive criticism, the Congressional Budget Office has made substantial progress in transparency over the last several years. While there is more the CBO can do, this is a success worth celebrating.

The CBO now features a section on its website dedicated to its transparency efforts. It has released additional data, such as the account-level budget authority and outlay baselines. More information has been provided about the assumptions that influence its cost estimates, and it has made available certain interactive models allowing the public to better understand how different policy options could affect the budget and the economy.

The CBO even publicly reviews some of its previous cost estimates to analyze their accuracy.

This commitment to transparency is commendable. Because the CBO is relied upon as an independent resource for lawmakers, faith in the agency’s work is key. Additional transparency is an important way for Congress and the public to better understand and trust the CBO’s work, as well as providing a way for the agency to obtain feedback and better hone its methods.

The CBO should continue its transparency efforts and continue looking for ways to better accomplish its mission of supporting Congress. One area that is particularly ripe for improvement is by publicly releasing more information regarding appropriations bills.

One of the most important products that the CBO produces are the cost estimates for legislation. The cost estimates are a vital tool that allow Congress and the public to understand the impact of proposed policy changes.

Appropriations bills are the most important legislation affecting the federal budget that are considered by Congress on a regular basis. Despite the importance of these bills, many would be surprised to learn that while the agency does provide updates on the overall status of appropriations, the CBO does not publicly provide cost estimates on each of the appropriations bills.

That is not to say that the CBO fails to review and analyze the individual spending bills. The agency has disclosed that it “provides detailed reports” on the account-level budget authority, outlays, and the changes in mandatory programs, colloquially known as “CHIMPs,” in appropriations bills.

Unfortunately, these reports are not posted on the CBO website for members of Congress, their staff, and the public to review. Instead, the CBO says they are distributed to “interested parties.” In reality, the interested parties email list consists of a few dozen staffers for congressional leadership, committees, and a small handful of others. Rank-and-file members who will be voting on the appropriations legislation generally do not receive the information or even realize that it might be available.

In 2017, former CBO Director Keith Hall answered a series of questions for the record from Rep. Tom McClintock, R-Calif., on this issue. McClintock directly asked Hall if the CBO would make its recurring reports and analysis on appropriations bills available to the public, and Hall testified that the CBO is developing a plan to make that information available to the public.

More than four years later, the CBO has not followed through on that plan.

The analysis that the CBO conducts regarding appropriations bills contain important information that should be made accessible.

In particular, it is important for a wide audience to have access to the CBO’s work regarding CHIMPs in appropriations bills. CHIMPs are often a budget gimmick that allow spending in an appropriations bill to be increased above the levels that would otherwise be permitted by allocations or caps.

This spending gimmick adds billions of dollars to the deficit each year. But because neither the appropriations committees nor the CBO provide full transparency on the appropriations bills, this gimmick is not well understood. Sen. Pat Toomey, R-Penn., has pressed the CBO on making CHIMPs and their budgetary effects more transparent.

In a sign of progress, the CBO has started including CHIMPs in its status of appropriations updates. But the report shows the aggregate CHIMPs in each bill, which doesn’t help members of Congress understand the effects of specific provisions in the bill.

Reports about outlays at the account level would also provide more information about the rates at which the budget authority that is provided to agencies in appropriations bills is actually spent. This information could be useful to aid Congress’ important role in providing oversight of federal agencies’ use of appropriated funds.

The CBO has taken noteworthy steps to improve transparency and should build on its previous and ongoing efforts to increase access to key data. While there is much that could be done on this front, an important next step for the CBO would be following through on its plans to publicly release more information related to the appropriations bills that spend more than $1 trillion each year.