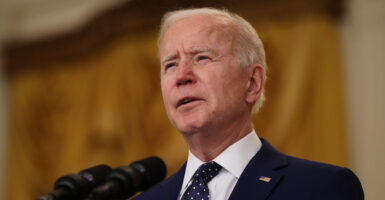 The National Institutes of Health announced Friday that “[the Department of Health and Human Services] is reversing its 2019 decision that all research applications for NIH grants and contracts proposing the use of human fetal tissue from elective abortions will be reviewed by an Ethics Advisory Board.”

Health and Human Services Secretary Xavier Becerra had said Thursday that he opposed the Trump administration rules restricting the use of aborted fetal tissue, The Washington Post reported.

“We believe that we have to do the research it takes to make sure that we are incorporating innovation and getting all of those types of treatments and therapies out there to the American people,” Becerra said, according to the publication.

Fetal tissue is used in a number of research projects looking for cures and treatments, including Alzheimer’s, spinal cord injury, eye disease, and HIV, but religious and pro-life advocates argue the practice is unethical since the fetal tissue comes from aborted babies.

Pro-life advocates responded to the news with condemnation. Susan B. Anthony List President Marjorie Dannenfelser accused the Biden administration, and Becerra, of “moving rapidly to pay back their abortion industry allies and wipe out pro-life progress made under the Trump-Pence administration.”

“From day one they have sought to expand abortion on demand, funded by taxpayers, against the will of the strong majority of Americans,” Dannenfelser said in a statement. “Now they would force Americans to be complicit in barbaric experiments using body parts harvested from innocent children killed in abortions, with no limits of any kind.”

Dr. Tara Sander Lee of the Charlotte Lozier Institute, SBA List’s research arm, said the decision defies “both the best ethics and most promising science,” noting that “fetal tissue was not, and has never been, used for polio or any other vaccine, nor  to produce or manufacture any pharmaceutical.”

“There are superior and ethical alternatives available such as adult stem cell models being used by countless scientists worldwide to develop and produce advanced medicines treating patients now, without exploitation of any innocent life,” Lee said. “All scientists should reject the administration’s attempts to prey on fears related to the pandemic to advance the practice of harvesting fetal tissue.”

Biden’s move to reverse Trump’s ban is also at odds with the new president’s Catholic faith: The Catholic Church teaches that abortion is “a crime against human life,” “constitutes a grave offense,” and that a person who obtains an abortion is automatically excommunicated from the Catholic Church.

“Such use tends to legitimize abortion as a source of ‘life-affirming’ treatments, and requires collaboration with the abortion industry, which should be avoided,” the United States Conference of Catholic Bishops said in a statement during former President George W. Bush’s administration.