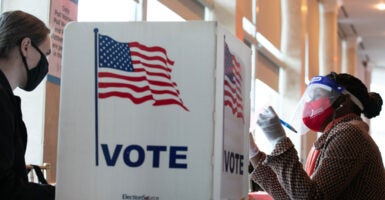 Editor’s note: The misrepresentation of Georgia’s new election law by politicians and activists on the left is a serious matter to The Daily Signal’s audience. Here’s a sampling of your reaction from the mailbag at letters@dailysignal.com.—Ken McIntyre

Dear Daily Signal: Thank you for the many well-researched and incisive articles covering the lies and hypocrisy in the criticism of Georgia’s election law. The April 8 article by Fred Lucas that compares heavily criticized aspects of the Georgia laws to laws in other states is particularly powerful (“How Georgia’s Voting Law Compares to 7 Blue, Purple States’ Laws”).

By now, except for the stubborn dishonesty from holdouts like CNN, MSNBC, The New York Times, and others, this issue has become a clarifying example not only of the mendacity of the left, but also their Machiavellian manipulation of business leaders to jump on the bandwagon of false criticism.

Perhaps these CEOs and Major League Baseball’s commissioner, Rob Manfred, were either too busy to have read the law before speaking or too complacent.

Now that the truth is abundantly clear, they should all apologize, or their boards of directors should ask for their resignations for allowing themselves to become dull cudgels of partisan propaganda.

And perhaps The Washington Post will award them four Pinocchios so they can join President Joe Biden in the hall of shame.

Ethical individuals who have intellectual and moral integrity know that if an idea reflects truth, it does not need to be presented through lies. Lies and hyperbole surrounding an idea generally indicate it is false.

“Truth, justice, and the American way” once coexisted with Coca-Cola and baseball.  Not anymore. The damage to these organizations, along with Delta Air Lines and others, will be felt in lost revenue.

The damage to our country will be felt in other ways. But there is, perhaps, a silver lining: Honest coverage of this issue is killing HR 1, congressional Democrats’ national election legislation.—Bill Kelly, Chestnut Ridge, N.Y.

Dear Daily Signal: I have read the election bill signed into law by Georgia Gov. Brian Kemp, unlike many other Americans (“Georgia Gov. Brian Kemp Explains His State’s New Election Law: What’s in It, What Isn’t”). The law simply reestablishes commonsense voter laws that Stacey Abrams (the unsuccessful Democratic candidate for governor) and her sister the judge overrode in 2020, with the COVID-19 pandemic as the excuse.

I say: Thank you, Gov. Kemp, for taking the correct action to promote voter integrity. I just pray that the governor can stand strong against his aggressive opponent, Ms. Abrams.—Trisha Campbell, Gwinnett County, Georgia

Dear Daily Signal: Having read Fred Lucas’ article, words cannot describe how absolutely disgusted I am at this point (“Conservatives Call Foul on Baseball’s Hypocrisy Over Georgia Election Law”). Major League Baseball punishes Georgia for implementing its 10th Amendment rights under the Constitution: Any power not directly conveyed to the federal government reverts back to the states.

If I remember correctly, this also applies to states passing their own voting laws.

I love the way that the article points out that while Major League Baseball stands against Georgia’s “voter suppression,” it has no problems with the oppression in China and Cuba, both countries that MLB has partnerships with.

Apparently MLB’s woke virtue-signaling morality does not apply when it comes to the league’s wallet. I wholeheartedly agree with Republican lawmakers who wish to pull Major League Baseball’s exemption as it pertains to the Sherman Antitrust Act of 1890.

Hypocrisy rules the day in the Democratic Party. They only take the moral stands that cost them the least. Why should Major League Baseball be any different?—Eric Kielhorn, Norwich, Conn.

Thanks to The Daily Signal for allowing us to see the truth with a comparison of Georgia’s election law to Colorado’s, as well as the other states listed.—Mike Martin

I believe all the criticism about the new Georgia election law goes to the heart of why those on the left want the new, federal “voting rights” law known as HR 1.

That way they control election procedures at the federal level, rather than a hodgepodge of states doing their own thing, as the Constitution so orders. Basically, this is a setup for things to come.—Al Imbert, New Smyrna Beach, Fla.

I really like Fred Lucas’ article comparing state election laws, but for many people it is too long. Without some careful review, it is hard to determine who does what and when.

It would have been better, for me, to have seen a chart that lists Georgia’s election rules along with other states that have similar or more rigid terms.—Jim Emerald, Smith County, Texas

This is a great article by Fred Lucas. Suggestion: It would be ever so much more powerful of there also was a table comparing states. Such a chart would have a column for each state and rows for each feature of the states’ respective laws. Keep up the great work.—Greg Tarsa

Very informative article. Unfortunately, as we know, for the left it is never about the facts but about the narrative.—Morgan Spector

Getting at the Truth

Dear Daily Signal: Fred Lucas did a good job illustrating the dishonesty of the Democrat Party, including those in Congress and all the way up to the president (“Fact-Checking 6 of Opponents’ Claims About Georgia’s Election Law”).

Stacey Abrams’ group, Fair Fight Action, is being hypocritical when taking over state elections is exactly what Democrats are trying to push through Congress with their HR 1. Keep up the good work.—Bob Abbott, Oklahoma

The practice of ballot harvesting should be illegal. The vote is a serious obligation; people can make it to the polls or vote by absentee ballot. Those who do neither should not be pandered to.—Morgan Spector

Who needs guys running around with sticks trying to hit a ball (“Conservatives Call Foul on Baseball’s Hypocrisy Over Georgia Election Law”)? Fred Lucas’ article is the new version of a home run.  For more interesting, far more exciting, and far more meaningful.  Many thanks.—Jim Quinn

Here in Ohio, we have to provide ID and strangely enough there wasn’t any apparent voter fraud at election time. The will of the people has to be protected with election integrity.

The left is the problem with our once great republic; they have done all they can to destroy it in the name of democracy. The bigotry is astonishing.—Rex Myers, Ohio

Major League Baseball is playing politics.  Sports should have nothing to do with politics. Sports of all kinds should remain neutral.—Mary Erickson, California

Why have a Constitution if laws don’t mean anything?  In my generation, we would call this blackmail.

Since when do we allow so many people and corporations to pour money into a state they don’t even live in, in an effort to control that state? Why have 50 separate states? What Georgia does is their business.—Suzan Cartagena

I would like all these folks who criticize Georgia’s law to explain what part of the law restricts anyone from voting in Georgia.—Daniel Wagner

It is time to strip Major League Baseball of its exemption from antitrust laws. Have them play by the rules others follow.

Also figure out a way to tax the heck out of MLB’s revenues from China and Cuba.

As to our elite representatives, why not read the Georgia law and then advocate your positions? Right now you are all speaking from darkness and perpetuating lies.—Joe Farrell, Johns Creek, Ga.

I agree with moves to boycott companies that show political partisanship, just like the left does. It is un-American, but they started it.

Not being a sports fan or frequent flyer, I won’t have much impact on those venues. But it is my intention to limit my purchases from retailers that are openly partisan, those selling goods made in China, and food vendors who promote or use Coca-Cola products.

I think all tax exemptions should be denied to partisan retailers and industries.—George Sperry, Valparaiso, Ind.

Major League Baseball has no business getting involved in politics. Their actions made me decide to boycott all MLB functions, games, and merchandise.

I know I’m not alone in taking this action. I will take similar action against corporate sponsors of MLB that seek to punish Georgia for its election legislation.

I would like to make the simple request that someone on the left specifically explain what exact terms of the Georgia law suppress voters.

We keep hearing that it is “Jim Crow,” and I want the critics to be specific. They never are. It seems that if one Democrat says something, it becomes truth for all without any research or proof.

When will people wake up and do their own research?—Janet Shobe

Only a fool would believe such claims. Yet, in a nation where foolishness is not hard to spot, these “voter suppression” claims get some traction.

The legitimacy of our elections is critical to our form of government. We must put in place good, commonsense regulations to insure that legitimacy.

That’s what Republicans are trying to do. Democrats, not so much.  Good job, Georgia Republicans!—Randy Malcom, Limon, Colo.

Dear Daily Signal: The commentary article on election integrity laws by Hans von Spakovsky and Jessica Anderson should be submitted to the Times as an op-ed (“The New York Times Can’t Get Basic Facts Right on Election Reform”). And if the Times refuses to publish it, send it to all their competitors.—William Norton, Augusta, Ga.

Dear Daily Signal: Spot-on analysis by Victor Davis Hanson about the “generals” of the woke revolution (“The Woke Revolution Is Powered by the Elites”).

I recall that while my wife and I were walking around an upper-class section of Tacoma, Washington, we saw “Black Lives Matter” signs posted in so many yards.  Maybe the residents are virtue signaling and truly believe that America is fatally flawed.

But I think many just plant those signs so that someday rioters won’t destroy or loot their homes, seeing that they support the anarchy those signs espouse. Keep up the fight.—Mark Galloway, Shelton, Wash.

As usual, Victor Davis Hanson writes a concise, factual, well-written article about the current crisis spreading through America and exported to other countries.  Who better can comment on the hypocrisy of elites, particularly in academia, than he who has experienced it first hand?—Glenn Kane

Hanson’s commentary was the best article I have read this week. But Facebook, the only social media platform I use, won’t let me share it.

How I want to shout this out. Thank you for great truths. We in Middle America hear you!—Michelle Clark