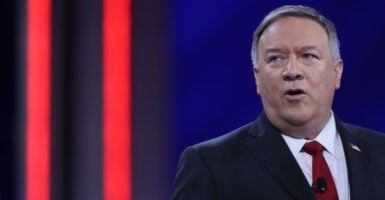 As the Biden administration moves to reenter the Iran nuclear deal at a conference in Vienna, former Secretary of State Mike Pompeo warned Wednesday against dealing with the “evil” and “anti-Semitic” Iranian regime.

Pompeo said the “world’s foremost sponsor of terror, the Islamic Republic of Iran, today is in Vienna,” meeting directly with U.S. diplomats, as well as with diplomats from France, Germany, and Britain.

“I am hoping each of the leaders in that room acknowledge that the regime is indeed evil. It is anti-Semitic. Indeed, it speaks of its genocidal intent while denying the Holocaust,” Pompeo said Wednesday in New York. He spoke at Rabbi Shmuley Boteach’s World Values Network on the eve of the 73rd anniversary of Israel’s independence.

“America, who is the noblest force for good and for human rights in the world, cannot permit the return to a situation where the risk to the Jewish homeland is real and the capacity for Iran to obtain a nuclear weapon is real,” Pompeo said. “I pray that we will move forward on a path, which is decent and righteous and moral, and make sure that we always defend those democracies in this world who are prepared to stand up for their own rights.”

Iran’s supreme leader, Ayatollah Ali Khamenei, and Iranian President Hassan Rouhani both boasted that Iran would increase uranium enrichment to 60%, the highest level yet. That comes after they blamed Israel for the bombing this past weekend of Iran’s main Natanz nuclear-enrichment site.

Enriched uranium at 60% would still be lower than weapons grade, which would have to be enriched at 90%.

“The offers they provided are usually arrogant and humiliating [and] are not worth looking at,” the ayatollah said in a public address.

The Obama administration entered the Iran agreement —formally known as the Joint Comprehensive Plan of Action—to drop sanctions on Iran if it agreed to slow its nuclear program. Other parties to the original agreement were Britain, France. Germany, Russia, and China.

The Trump administration withdrew from the agreement in 2018 amid concerns Iran wasn’t complying and reimposed sanctions. The Vienna talks are aimed at getting the United States back into the agreement.

Pompeo said Wednesday that reentering the agreement would be unwise.

The former secretary of state noted that in 1948, President Harry Truman made a “moral and right decision” within 11 minutes of Israel’s declaration as an independent nation to recognize the new Jewish state.

“I think about the two declarations of independence. Each different documents, to be sure, but they share some self-evident propositions,” Pompeo said. “In America’s case, it was the self-evident right for all men to be created equal. In Israel’s case, it was what the Hebrew prophets handed down the right of the Jewish people to be masters of their own fate in their own homeland.

Both documents created by citizens who know that their words would, time and time again, be required to back up with real deeds and military strength, and they knew that freedom requires incredibly strong defense, and each nation was prepared to do that.

Pompeo noted the strong U.S. relationship with Israel during the Trump administration, including fostering the Abraham Accords and moving the U.S. Embassy in Israel to Jerusalem.

“We did these because they were the right thing to do. They were the honest thing to do,” the former envoy said. “While we had wished many things had happened earlier, we were proud to be part of these transformative actions that President [Donald] Trump so courageously undertook.