US Enters Multilateral Minefield in Indirect Nuclear Talks With Iran 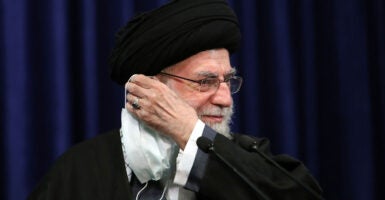 The Biden administration has agreed to meet for indirect talks with Iran in Vienna on Tuesday. The talks, brokered by the European Union, will involve all of the parties to the 2015 nuclear agreement, formally known as the Joint Comprehensive Plan of Action.

Both the Biden administration and Tehran had declared their willingness to revive the nuclear agreement, although Biden officials have called for a follow-on agreement to “lengthen and strengthen” the flawed nuclear agreement.

Tehran maintains that no negotiations are needed to revive the nuclear deal—Washington just needs to lift sanctions, after which Iran will end its violations of the agreement.

Tehran then accepted the European Union’s proposal, which it knows will maximize its leverage with Washington by including in the initial talks Russia, China, Britain, France, and Germany—all of which favor a quick return to the nuclear agreement with no changes.

Iran seeks a return to the sweet deal it had before the Trump administration exited the agreement in 2018.

The nuclear agreement in effect legitimized Iran as a threshold nuclear power, by dismantling sanctions on Iran but not Iran’s nuclear infrastructure. Tehran merely put centrifuges in storage and temporarily repurposed nuclear sites that had been constructed covertly in violation of its obligations under its comprehensive safeguards agreement pursuant to the Treaty on the Non-Proliferation of Nuclear Weapons.

By agreeing to talks in which it will respond to the output of working groups composed of Iran and the other nuclear agreement parties, the Biden administration has put itself at a great disadvantage. Iran and its supporters will drive the agenda of the talks, presenting Washington with pre-cooked options that are likely to erode its bargaining leverage.

The Vienna talks, which could drag on for months, are likely to severely test the Biden administration’s declared goals of strengthening the weak restrictions built into the nuclear deal and reaching a follow-on agreement that will extend key restrictions on Iran’s uranium enrichment and other activities that sunset by 2030 under the Joint Comprehensive Plan of Action.

If it is to succeed, the Biden administration must avoid being tied down in a multilateral straitjacket by other parties who seek an unconditional return to a flawed deal whose weak restrictions gradually expire.

U.S. diplomats will be in close proximity to the talks in Vienna, but not in the same room with Iranian and other diplomats, who will form working groups to devise a plan for simultaneous, choreographed steps that Iran and the U.S. will take to deescalate the diplomatic standoff.

That means that Iran, supported by the other nuclear deal parties, will have much more input in setting the agenda of the talks than the U.S. This may give political cover to the Biden administration for compromising on its declared goals by cloaking its retreat as concessions to European allies, rather than to Iran.

Another problem with the structure of the talks is that the U.S. will come under multilateral pressure to reward Tehran with early sanctions relief that will undermine Washington’s future bargaining leverage and make a follow-on agreement nearly impossible.

At a minimum, there should be no sanctions relief until Iran has stopped proxy attacks against U.S. troops in Iraq and has deescalated its uranium enrichment.

To avoid these potential pitfalls, the U.S. should seek direct talks with Iran, not allow other powers to insert their agendas into the proposed working groups.

The Biden administration unwisely has entered a diplomatic labyrinth designed by allies who seek an unconditional U.S. return to the flawed nuclear deal. To reach that goal, they are likely to pressure Washington into granting premature sanctions relief to Iran, which will empower and enable a predatory regime that has a long record of violating its nonproliferation obligations.

The Biden administration would be wise to focus on relentlessly pressuring Iran until it agrees to a new nuclear agreement with stronger and longer restrictions, rather than succumbing to pressure from other parties to return to the deficient Joint Comprehensive Plan of Action.

Why Returning to the JCPOA Is a Dangerous Mistake