Biden Administration Should Say No to New Trade Deals With China 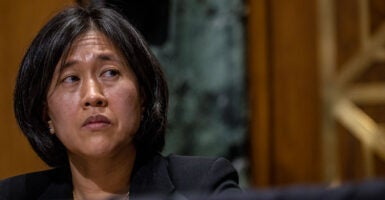 United States Trade Representative Katherine Tai has stated that she is in no rush to lift tariffs associated with the Trump administration’s U.S.-China Phase One trade deal. (Photo: Tasos Katopodis/Getty Images)

In her first media interview since being confirmed United States trade representative, Katherine Tai said last week she is in no rush to lift tariffs associated with the Trump administration’s U.S.-China Phase One trade deal. She should reconsider.

Tai’s stated reasoning for maintaining the tariffs is that they provide useful negotiating leverage. Which is kind of like holding a gun to your own head and threatening to shoot unless you’re given what you want.

But OK, think of it as leverage. The only legitimate thing to negotiate would be new access to the Chinese market. And given all that is going on today with China, now would be the absolutely wrong time to do that.

The Chinese authoritarian system is tightening and its interaction with the outside world is becoming more aggressive. There is a well-worn list of examples out there, but take just two: the scrapping of its treaty commitments to maintain Hong Kong’s high degree of autonomy and its genocide on Uighur Muslims in Xinjiang.

New commercial negotiations with China would make the U.S. look every bit as compromised as our European friends do with their EU-China comprehensive agreement on investment.

It is a little mystifying sometimes to watch official Chinese messaging in Europe. China’s retaliatory sanctions on Europe are targeting free speech itself. The Chinese ambassador to Paris and other trolls in China’s official media are in a nasty Twitter war with a highly regarded French researcher. And in Ireland, the Chinese Embassy is dragging Aesop—yes, that Aesop—into the fight.

But there is method to China’s madness. Beijing has made a good bet that it’s got the Europeans right where it wants them. The French and the Germans have decided that the comprehensive agreement on investment will be approved, and that the EU Parliament—despite the best efforts of members who remain highly committed to the rights of man—is not going to stand in the way.

That being the case, Beijing must reason, why not send a sign of strength to the rest of the world—especially to places like Africa where people already have mixed feelings about their former colonizers?

Even with all that is going on with China, chances are the comprehensive agreement on investment will be approved. German Chancellor Angela Merkel will secure her China legacy and French President Emmanuel Macron will take a claim of concern for French wallets to the polls next year, hoping voters are not paying attention to circumstances under which their agreement is sealed.

Chinese President Xi Jinping and his court know well that money talks in Europe, and they suspect that all the “values talk” is just that, talk. The Biden administration shouldn’t let them make the same point about Washington.

So scrap the tariffs on China. They always hurt Americans more than the Chinese, and they had questionable legal basis anyway. And scrap the purchasing commitments the Chinese made in the Phase One agreement. Export quotas are never a good idea.

But beyond that, the Biden administration must say no to any new trade deals with China.