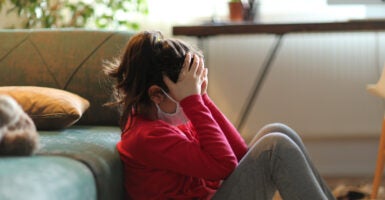 Research shows that between 88% and 98% of children struggling with gender dysphoria will reconcile with their bodily sex if allowed to go through puberty without hormonal interventions. (Photo: Ridvan Celik/E+/Getty Images)

Just a week after Arkansas Gov. Asa Hutchinson signed bills protecting women’s sports and medical conscience protections from being forced to bend to progressive gender ideology, he now has the chance to sign yet another pro-science bill that would protect children from harmful surgical and hormonal interventions on their bodies in the name of “gender affirmation” and “transgender medicine.”

The Arkansas General Assembly on Monday passed HB 1570, the Save Adolescents From Experimentation (SAFE) Act. The bill would prevent the chemical and surgical destruction of minors’ genitalia by preventing doctors from prescribing puberty blockers and cross-sex hormones or performing surgeries to “affirm gender identity” for children and youths under 18 years of age.

The bill does no such thing.

The lives of transgender individuals aren’t under attack. No transgender youth will be turned away from basic health care services or facilities.

In fact, the Arkansas bill would save lives by ensuring that children who struggle with gender dysphoria will be provided the best science- and evidence-based treatments to ensure lifelong health and wellness.

Research shows that between 88% and 98% of gender dysphoric children will reconcile with their bodily sex if allowed to go through puberty without hormonal interventions.

Conversely, hormonal and surgical interventions on children’s bodies, such as puberty blockers, cross-sex hormones, and surgical procedures have been shown to lead to cardiovascular disease, loss of bone density, and sterilization.

Moreover, the science shows that those who undergo so-called transition surgeries experience no mental health benefits and are 19 times more likely than the average population to commit suicide.

Given that no lasting psychological health benefits are gained as a result of transitioning, bills like Arkansas’ measure that prevent gender dysphoric children from rushing into irreversible sex-change interventions, whether chemical or surgical, actually save lives and ensure health.

While this bill is the first of its kind to be passed at the state level, both Democrats and Republicans in other states have introduced similar legislation.

In Congress, Sen. Roger Marshall, R-Kan., and Rep. Doug LaMalfa, R-Calif., have introduced a similar bill that would offer federal protection for children from such life-altering, irreversible, genital-mutilating interventions.

Alongside legislative efforts in state legislatures and Congress, thousands of Americans have signed The Promise to America’s Children, a national grassroots movement created to protect children in their minds, bodies, and relationships with their parents.

The Promise coalition focuses on exposing bad policies that would normalize genital mutilation by imposing destructive gender ideology as orthodoxy, and on highlighting good policies that protect children’s health, free speech in education, and parental rights. Both the legislative and grassroots effort come in response to the Biden administration’s radical transgender agenda.

He has also promised to sign the Equality Act, which, by imposing progressive gender ideology as legal orthodoxy, would effectively outlaw any doctor, counselor, or facility that does not provide irreversible hormonal and surgical “transition” procedures and legally sanction the mutilation of some of America’s most vulnerable and emotionally distressed children.

While some governors have failed to stand firm in critical political skirmishes with the radical left and its Big Tech allies in their war on America’s children, Hutchinson should follow the lead of the Arkansas Legislature by heeding the science and protecting doctors, children, and their parents from the politicization of medicine.

Hopefully, other lawmakers will have the courage to follow suit.