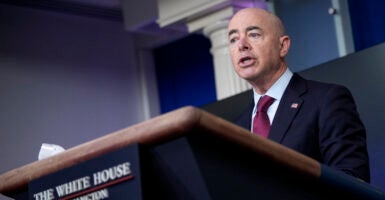 In the midst of the crisis at the southern border, Homeland Security Secretary Alejandro Mayorkas dismantled a longstanding, nonpartisan advisory body, announcing “a new model” Friday in a letter terminating most of its members.

Mayorkas’ letter told 32 members of the Homeland Security Advisory Council that he is removing them, though they were appointed by previous homeland security secretaries in Republican and Democratic administrations.

“In the service of an orderly transition to a new model for the HSAC [Homeland Security Advisory Council], I have ended the term of current HSAC members effective March 26, 2021,” Mayorkas said in the letter dated Friday. “I will reconstitute the HSAC in the next few weeks, once the new model has been developed.”

“You have demonstrated your commitment in different ways,”  Mayorkas wrote to the 32 terminated homeland security advisers. “Many of you have served on the HSAC for years.”

The advisory council members were not paid for their service.

The decision by President Joe Biden’s homeland security secretary to ax the advisory body came as a surprise to member James Carafano, who is vice president for national security and foreign policy at The Heritage Foundation and served on the council during the previous three administrations.

“I’ve never heard a partisan word uttered among members. The council has been a nonpartisan oasis in the D.C. jungle,” Carafano told The Daily Signal. “It is the secretary’s advisory board. If he wants to restructure it, that is his prerogative. But it has been the most diverse and talented board I have served on, so I don’t know what’s missing here.”

President George W. Bush’s administration set up the advisory council for the then-infant Department of Homeland Security to provide advice and recommendations to the DHS secretary. The council has included members with varied experience in state and local government, as first responders, and in business and academic institutions. The council conducted research and routinely issued reports.

Other members of the council removed by Mayorkas include Frank Cilluffo, director of the McCrary Institute for Cybersecurity and Critical Infrastructure Protection at Auburn University; John F. Clark, CEO of the National Center for Missing and Exploited Children; Cathy Lanier, former District of Columbia police chief and now senior vice president and chief security officer for the National Football League; Carie A. Lemack, CEO of DreamUp; Cynthia E. Renaud, president of the International Association of Chiefs of Police; and Jonathan Thompson, CEO of the National Sheriffs’ Association.

Mayorkas also removed Ken Cuccinelli, a former acting deputy DHS secretary and former Virginia attorney general who was appointed to the council during the waning days of the Trump administration. Cuccinelli is currently a visiting fellow for national security and foreign policy at The Heritage Foundation.