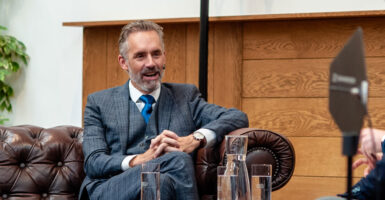 Jordan Peterson’s new book “Beyond Order: 12 More Rules for Life” offers a wealth of timely messages, including why it is better to confront life’s challenges boldly and with gratitude rather than fall into nihilistic resentment. (Photo: Romy Arroyo Fernandez/NurPhoto/Getty Images)

Sarah H. Weaver is a graduate student at Hillsdale College and a freelance writer.

In the introduction of his newest book, “Beyond Order: 12 More Rules for Life,” author and clinical psychologist Jordan B. Peterson states that he wrote it to explore “how the dangers of too much security and control might be profitably avoided.”

“Beyond Order” is a companion to his previous book, “12 Rules for Life: An Antidote to Chaos,” which explored the dangers of venturing without the requisite humility and grounding into the vast unknown. “Beyond Order” explores the dangers of a state of too much order, which “can rigidify as a consequence of ill-advised attempts to eradicate from consideration all that is unknown.”

The book, written gradually during Peterson’s own battle with various health difficulties, is refreshingly relevant in a world rattled by challenges, including racial riots and group divisions, a global pandemic, and post-election partisan violence, to name a few.

Peterson has had no shortage of negative press, and after more than a year out of the public eye, his media foes haven’t let up. The Guardian summed up “Beyond Order” in a headline as “a ragbag of self-help dictums.” Helen Lewis, a journalist Peterson had clashed with before in a viral GQ interview, wrote that his return to the public eye was due to the “irresistible ordeal of modern cultural celebrity.”

Yet Peterson is far from the evil right-wing provocateur his media foes wish him to be, and he is back with a much-needed message to a rattled and shiftless world.

In an age that embraces a victimhood mentality, Peterson tells us why it would be better to confront our suffering and make something useful out of what we have been given than to retreat into nihilistic resentment.

Peterson’s conception of the importance of personal responsibility despite one’s suffering would leave no room for those activists who find, say, Dr. Seuss the chief concern of those who wish to right the wrongs of history.

In Rule 6, which bids the reader to “abandon ideology,” Peterson writes about the strange hush of an audience every time he brings up the topic of responsibility during his public talks.

This is because, Peterson argues, people are so hungry for it. Young people in particular have been starving for this king of a message, and it “has left them vulnerable: vulnerable to easy answers and susceptible to the deadening force of resentment.”

>>> The Heritage Foundation’s Genevieve Wood interviewed Jordan Peterson about what draws people to socialism. Listen to the full conversation on “The Daily Signal Podcast.”

Peterson tells several stories in his book and elsewhere of people who have embraced responsibility for their own destiny and pulled their life back from unimaginable circumstances. They often say Peterson helped articulate what they already really knew.

“Helping people bridge the gap between what they profoundly intuit but cannot articulate seems to be a reasonable and valuable function for a public intellectual,” Peterson writes.

Today, race problems are “solved” by one group—generally white people apologizing for their “whiteness” and the accompanying alleged role of oppression they play. Peterson diagnoses the kind of thinking that leads to such public displays of idiocy quite well:

Since the ideologue can place him or herself on the morally correct side of the equation without the genuine effort necessary to do so validly, it is much easier and more immediately gratifying to reduce the problem to something simple and accompany it with an evildoer who can then be morally opposed.

Instead, Peterson urges his reader to assume responsibility for that corner of his life he can fix. Then, he may reach his hand out to attempt to rectify the problems of the world.

Hearkening back to Rule 6 of his previous book, “12 Rules for Life,”—“Set your house in perfect order before you criticize the world”—Peterson bids his reader to “have some humility. Clean up your bedroom. Take care of your family. Follow your conscience. Straighten up your life. Find something productive and interesting to do and commit to it.”

After a year that has been so dismal it has become the rueful subject of many a meme, Peterson proffers what may seem like an unlikely response—gratitude in spite of your suffering. There’s always a reason to be a victim, and perhaps a really legitimate one. But even so, there’s also always a reason to be grateful.

There’s something amazingly simple about such a statement, yet the success of Peterson’s videos, podcasts, and books points to the fact that our world is no less hungry for such a timeless truth for its simplicity. The antidote to the suffering of this world, Peterson writes, is to “confront the limitations of life courageously.”

He goes on: “Courage and nobility in the face of tragedy is the reverse of the destructive, nihilistic cynicism apparently justified under just such circumstances.”

Indeed, the right response to the unspeakable horrors that one can encounter in life is not nihilistic resentment, but “the assumption that there is enough of you, society, and the world to justify existence.”

It takes a certain measure of bravery to choose this outlook when resentment seems so justified, but you will be rewarded, Peterson says, with a life that is spiritually and psychologically rewarding “in the long run.”

There’s something divine about embracing responsibility and gratitude despite the sinister nature of existence, Peterson argues. “If God is, above all, as he is initially described, that implies that the men and women created in His image share with Him something of import—or, more to the point, they share an analogous destiny, necessity, or responsibility.”

In an age of ideological partisanship, Peterson explains the political and social utility of both the liberal and conservative impulses: “Conservatives are necessary for maintaining things the way they are when everything is working and change might be dangerous. Liberals, by contrast, are necessary for changing things when they are no longer working.”

This may seem reductionistic if we cannot even agree on what constitutes something no longer working. All the same, Peterson’s underlying assumption—that if we pause and listen, we may find that the solutions we rush toward headlong are not so simple or so easy to delineate—is manifestly correct. “Imagine who you could be and aim single-mindedly at that,” Peterson writes in Rule 2.

The final pages of the chapter are pure Peterson wisdom. He encourages his reader to aim at some attainable goal, or, as he might say in one of his lectures on the archetypal significance of “Pinocchio,” to “wish upon a star.” Once you have outlined a reasonable, attainable, and worthwhile plan, you must “voluntarily confront what stands in your way.”

That is fundamental to walking the fine line between the “order and chaos.” The moment you choose responsibility and gratitude in spite of your suffering, you have chosen “the straight and narrow path that constitutes the very border between order and chaos and that reversing which brings them into balance.”

And that is fundamentally what Peterson, in his broader message, and in “Beyond Order,” is encouraging us all to do. Walk the straight and narrow with courage, humility, and gratitude, in spite of your suffering, and in spite of the myriad of justified reasons to descend into resentment.

After the past year we’ve been having, what could be more relevant?