Professor Jordan Peterson Warns Against the ‘Dangerous Narrative’ of Victimization 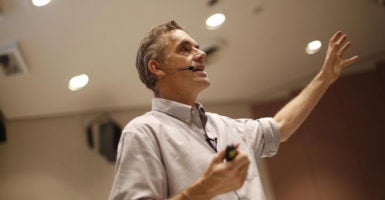 University of Toronto psychology professor Jordan Peterson called the narrative of victimization “dangerous” and said it’s being pushed on college campuses all around the world.

Peterson discussed, on “Fox & Friends” Monday, Candace Owens of Turning Point USA and her comments about the dangers of wanting to be a victim.

“I think that Candace is commenting about the danger of adopting a victimization oppressor narrative. And it’s a narrative that the hard left has really been pushing ever since Marx,” Peterson said on Fox News.

Peterson thinks colleges and universities are to blame for society’s victim mentality and believes it will only produce further division and conflict.

“It’s a very, very dangerous narrative,” he added. “And it’s certainly one that is unbelievably widespread on university campuses. To look at the world that way, to look at the world through a world identity lens puts us back in a tribal situation and will produce conflict.”

“Candace is objecting to that. And rightly so,” Peterson concluded. “It’s an unbelievably pernicious ideology and the universities are to blame for distributing it in large part. It’s really appalling and dangerous.”