The Hypocrisy of the Filibuster Busters 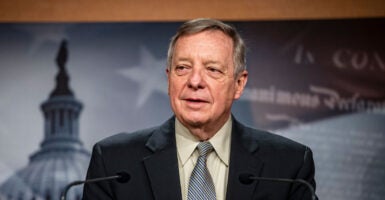 Sen. Dick Durbin, D-Ill., argued in 2018 that abolishing the filibuster "would be the end of the Senate." Now, he maintains that "the filibuster has a death grip on American democracy." Pictured: Durbin speaks during a news conference at the U.S. Capitol in Washington, D.C., March 16, 2021. (Photo: Samuel Corum-Pool/Getty Images)

The effort to undo the Senate’s legislative filibuster is an un-American, Constitution-eroding, radical play to nationalize politics by empowering slim and fleeting majorities to institute wide-ranging, generational policies.

Judging from the media coverage, you might be under the impression that Senate Minority Leader Mitch McConnell has some kind of duty to “diffuse” the Democrats’ threats of “filibuster reform”—“reform” is the euphemism for liberals destroying long-held Senate norms—by preemptively acquiescing to their demands before he even knows what they are.

Few reporters seem to have even the slightest bit of curiosity as to why a filibuster emergency didn’t come up during the Trump administration when Democrats were constantly—in unprecedented fashion, even—using the parliamentary tool against the president.

Democrats filibustered the GOP when it was running the House, Senate, and presidency; they filibustered a COVID-19 relief bill and Sen. Tim Scott’s criminal justice bill, just to name two.

The Senate GOP had to end debate on judicial nominees and break filibusters 314 times in President Donald Trump’s single term. To put that in perspective, every other president in the history of the United States has faced, combined, 244 of those roll-call votes over a filibuster.

Democrats say they can’t pass any important bills to “fund new roads” or “expand early voting” or “protect migrant children.” There are no such bills. There are boondoggle voting, immigration, and “infrastructure” bills stuffed with policies that should be none of the federal government’s concern.

But if Democrats are intent on compelling states to live under centralized rule, well, then yes, they should hit the 60-vote threshold—at the very least—to make it happen.

Then again, some issues are clearly a matter of federal concern—judicial appointments, for example.

The Senate only has a simple-majority threshold on those cases because former Sen. Harry Reid, not McConnell, blew up that 60-vote threshold for short-term political gain in 2013 when he thought his party would be running Washington for the foreseeable future.

Democrats can, of course, rectify this huge mistake and reinstitute the proper threshold. They have the power to do so right now.

It has also become popular to assert that McConnell would likely destroy the filibuster if given a chance. Where is the evidence for this? Republicans enjoyed complete control of the government for two years in 2016-17, and not once did McConnell even threaten to overturn the legislative filibuster when he could have jammed through all kinds of huge bills.

Democrats, on the other hand, have shown no inclination to function under any consistent principle in this regard—other than perhaps the quest for power.

In 2017, 30 Democrats signed a letter written by Sen. Susan Collins defending the filibuster as an imperative tool in maintaining the “deliberative” composure of legislature.

Sen. Dick Durbin argued in 2018 that abolishing the filibuster “would be the end of the Senate.” Now, the second-highest-ranking senator maintains that “the filibuster has a death grip on American democracy.” Why? “Senator McConnell taught me that I was wrong. He managed to use and abuse the filibuster so many times and stopped the Senate in its track.”

What in holy hell is Durbin talking about? Republicans haven’t used the filibuster since 2014. What recent bill of theirs has needed to overcome a filibuster?

Moreover, it takes preternatural chutzpah for President Joe Biden to claim that “democracy” is having a difficult time functioning less than a week after he signed a wholly partisan, nearly $2 trillion Democratic Party wish list.

There is a far better argument to be made that the Founders would have recoiled from the thought of that monstrosity being rammed through the legislature without any debate or buy-in from half the states.

The real problem with the modern Senate, some of us would argue, isn’t the existence of the filibuster but the existence of reconciliation—which allows for lawmakers to avoid the 60-vote threshold in certain cases. But this debate is contrived by liberals and the media for one purpose only: to empower Democrats to lord over half of the country without debate or compromise.