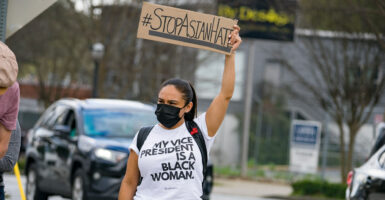 Leftists have not hesitated to exploit recent attacks against Asian Americans for their own agendas. Pictured: An activist bears a sign with the #StopAsianHate hashtag following the March 18 shootings in Atlanta. (Photo: Megan Varner/Getty Images)

Vik Ath is a conservative writer and a former U.S. Senate speechwriter. He currently resides in the eastern panhandle of West Virginia with his wife, Clare, and son, Eógan.

No words can express the sense of frustration and anger that overcame me as I watched yet another act of violence being committed toward my fellow Asian Americans. From the death of Vichar Ratanapakdee in San Francisco to the recent shootings in Atlanta, I thought to myself, when will this trend of violence end?

I couldn’t help but think of my elderly grandmother in Long Beach, California. How safe would she be going to the grocery store or just walking down the street?

She came to this country as a refugee, surviving the killing fields of Cambodia, losing her husband and three of her children to the genocide before making it to America. After surviving all those hardships, could someone take her life away here in America without cause?

As Asian Americans across the country wrestle with these same questions, I could not help but feel even more disgusted by the attempted politicization of these tragic events.

Rep. Pramila Jayapal, D-Wash., used the hashtag #StopAsianHate to tweet out, “Hateful rhetoric including the dangerous language used by my Republican colleagues and the previous president drives the anti-[Asian American and Pacific Islander] violence we are seeing across America. We must all step up to #StopAsianHate and end these attacks once and for all.”

The left’s subversion of these attacks is tasteless and downright disrespectful to the millions of Asian Americans across the country.

Even worse, The Washington Post tried to tie the Atlanta shooter’s Southern Baptist ties and the denomination’s rejection of “critical race theory” as having something to do with this tragedy.

As an Asian American and a Baptist, I can tell you that nothing is more racist than critical race theory. Classifying people by their race and pitting them against one another isn’t something that should be taught or celebrated.

For years I’ve watched as the left discredited Asian Americans as white-washed and “model minorities” simply for the merits of their achievements. The Harvard admissions scandal underscores exactly what the left thinks about Asian Americans.

So when I see tweets from leftist activists online, virtue signaling their support for the Asian American and Pacific Islander community through empty hashtags and propaganda videos on equity and critical race theory, I groan at the hypocrisy.

This isn’t a political issue, and the commentators and the writers over at The New York Times and The Washington Post need to stop trying to make it one.

No American I know, whether they are Baptist, white or black, are celebrating these attacks. Rather than try to divide the country further, why not address the actual culprits, the criminals who committed these actions, and work to bring them to justice?

When politicians like Jayapal blame their Republican colleagues, they’re resorting to nothing more than cheap political tactics to ramp up their base.

Members of the Asian American community do not need any more slogans, hashtags, or messages of support. They need action. They need justice. And they don’t need politicization.