Harvard Says It Uses Racial Discrimination to Sculpt a ‘Diverse’ Class. This Is a Dangerous Path. 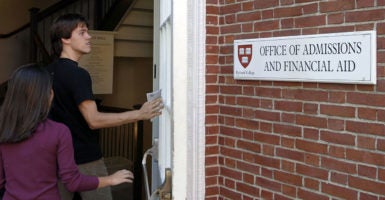 A federal judge concedes that Harvard University follows a “racially conscious” admissions system that gives a plus to black and Hispanic applicants but dings Asian applicants. (Photo: Glen Cooper/Getty Images)

A federal judge in Massachusetts has ruled that Harvard University does not illegally discriminate against Asian Americans.

The keyword is “illegally.” Harvard does discriminate against Asian Americans in its college admissions process.

District Court Judge Allison Burroughs concedes that Harvard follows a “racially conscious” admissions system that gives a plus to black and Hispanic applicants but dings Asian applicants, according to Harvard’s own internal review.

Treating a group worse or better than the way people usually are treated is the dictionary definition of discrimination, though Burroughs takes pains to avoid using the term in her decision.

But the Massachusetts judge, a Barack Obama appointee, maintained in the ruling Tuesday that Harvard’s discrimination was legal because Harvard demonstrated a compelling rationale for needing its race-conscious admissions program, and that such a program was the only way for the college to fulfill that rationale.

What is the “compelling rationale” she uses?  It is one word—diversity.

“Race-conscious admissions will always penalize to some extent the groups that are not being advantaged by the process, but this is justified by the compelling interest in diversity and all the benefits that flow from a diverse college population,” Burroughs wrote to explain why Harvard’s discrimination should not be considered illegal.

But the judge is wrong. Diversity is not a sufficient rationale to allow racial preferences to interfere with any kind of merit-based process, and to think otherwise is to make a very dangerous decision.

What is the purpose of an admissions system? It is to select the most qualified people for scarce positions.

The only “compelling interest” in an admissions system is to admit the most qualified people. Other interests can exist and even be good, but they are secondary to the primary interest of producing the most meritorious class.

And, I shouldn’t need to say this, but race has no effect on whether one should be considered meritorious for any position—not a positive, not a negative.

But let’s say that you believe that diversity is so important toward the establishment of a college class that you consider it a “compelling interest.” Would there still be a case for discriminating against certain races to achieve such “diversity?”

In 1948, President Harry Truman signed an executive order banning segregation in the U.S. armed forces. Truman signed this order despite reservations among many of his own generals, including Dwight D. Eisenhower, who testified before the Senate Armed Services Committee that the practice of racial discrimination was necessary for the “stability” of the enterprise. Stability was the justification then; diversity is the justification now—and both are wrong.

We passed the Civil Rights Act of 1964 to flatly ban discrimination on the basis of race—no matter the potential or perceived benefits. We cannot sacrifice our country’s progress on civil rights for the sake of a few spots at Harvard or other elite schools.

Now, Harvard has convinced Burroughs that what it has been doing to Asian Americans really isn’t all that insidious or anti-American. Harvard argues that race is only “one part” of its holistic considerations when determining how to sculpt a diverse class.

But if race is only “one part” of diversity, then why is Harvard fighting so hard to legitimize it? There are so many ways people are different from each other—in income, gender, geography, interests in subjects, talent, etc.

Yet Harvard insists that among all these characteristics, it absolutely needs to consider race to create a sufficiently diverse class of admitted students. Harvard is saying race isn’t all that important in its thinking—until someone suggests it should be removed, at which point it becomes the most important thing in the world.

This is where the plaintiffs misstepped a little. They attempted to show that Harvard was capable of keeping its desired racial balances without a racial preferences program. They should have asked instead why Harvard was so bent on focusing on racial diversity over all the ways humans are different from each other.

Because the truth is, it’s not about “diversity” at all. It’s about preserving racial identity politics. It’s about continuing to break down American meritocracy to pit races against each other. It’s about pursuing the ultimate oppression narrative.

And for the sake of that narrative, Judge Allison Burroughs let Harvard have its cake and eat it too.