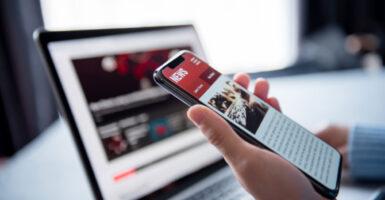 Both the media and economic freedom combined are key to curbing the spread of fake news during times of crisis, new research finds. (Photo: oatawa/Getty Images)

Economic freedom helps to inhibit the spread of fake news, according to a recent academic paper featured in the European Journal of Information Systems.

According to the study, titled “Impact of Mobile Connectivity and Freedom on Fake News Propensity During the COVID-19 Pandemic: A Cross-Country Empirical Examination”:

This will help in developing a resilient society, which is not on the lookout for additional information during times of crisis for alleviating their fears and anxieties.

More specifically, the study, which incorporated data from The Heritage Foundation’s annual Index of Economic Freedom, further underscores that:

Our findings reiterate the importance of economic freedom as the fundamental need for enhancing public trust. Pre-existing economic freedom perceptions are the building blocks for stability in a society, which countries can mobilise to maintain citizen trust when a crisis strikes.

Results from our study indicate that economic freedom as an institutional resource acts as a protective national-level capability that can offer collective resilience against fake news propensity. Hence, from a policy perspective, governments should undertake proactive efforts to build economic freedom perceptions among its citizens as a crisis preparedness measure.

Indeed, the ongoing COVID-19 pandemic has highlighted the important nexus of economic freedom and freedom of press.

In an economic and political system based on liberty, transparency, and accountability, freedom of the press is the backbone of a well-functioning civil society. Economic freedom and press freedom tend to go side by side, given that a free press can only exist and serve its purpose in an environment that is free.

Unfortunately, the spread of the coronavirus, which has caused tragic human suffering and enormous economic costs, has also led to crackdowns on press freedom around the globe.

As reported by the Committee to Protect Journalists and Reporters Without Borders, China and Iran “have been among the most repressive, cracking down on independent reporting and arresting citizens who have published social-media posts that contradicted official accounts.”

Not surprisingly, publicly available international data confirm the critical linkage between economic freedom and press freedom. Simply put, the more economically free a country is, the greater freedom enjoyed by the press.

Comparing the country scores in the Press Freedom Index with the ratings in The Heritage Foundation’s annual Index of Economic Freedom highlights the clearly positive relationship between the two important aspects of liberty, which reinforce each other.

On the other hand, countries with scant economic freedom tend to lack press freedom as well, with their citizens mired in economic and political repression. Consider Venezuela, Cuba, China, Iran, and North Korea, among others.

The ongoing coronavirus pandemic has provided a much-needed reminder that free-market capitalism is the fundamental foundation for a vibrant and prosperous civil society, including a free, transparent press, without which our efforts to craft fact-based policy responses would be severely constrained.

The fact that economic freedom and press freedom are closely intertwined in a multifaceted relationship is another unambiguous reason why we need to advance the rule of law, integrity, and transparency more than ever—all of which are key ingredients of our nation’s overall economic freedom.