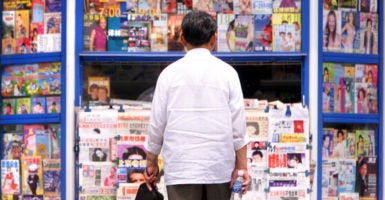 The spread of the coronavirus, which is causing human suffering and enormous economic costs, has also led to crackdowns on press freedom around the globe. Pictured: A man looks at magazines and newspapers for sale on May 25, 2000, in Beijing. (Photo: Stephen Shaver/AFP/Getty Images)

In a joint open letter to the Chinese government last month, the publishers of three major U.S. newspapers wrote:

Perhaps more than any major news event in modern history, this moment underscores the urgent importance of both probing, accurate, on-the-ground reporting from the centers of the pandemic and of sharing the information, insights and lessons that reporting reveals as widely as possible.

Unfortunately, the spread of the coronavirus, which is causing tragic human suffering and enormous economic costs, has also led to crackdowns on press freedom around the globe.

As reported, China and Iran “have been among the most repressive, cracking down on independent reporting and arresting citizens who have published social-media posts that contradicted official accounts.”

Such efforts have already had serious negative consequences, interfering with the ability of decision-makers in both the public and private sectors around the world to make critical and timely policy decisions.

The fact that China and Iran, two of the least economically free countries in the world, are among those most guilty of limiting the free flow of information is no surprise. As Austrian economist Ludwig von Mises succinctly noted in “The Anti-Capitalistic Mentality”:

A free press can exist only where there is private control on the means of production. In a socialist commonwealth, where all publication facilities and printing presses are owned and operated by the government, there cannot be any question of a free press. The government alone determines who should have the time and opportunity to write and what should be printed and published.

Indeed, in an economic and political system based on liberty, transparency, and accountability, freedom of the press is the backbone of a well-functioning civil society.

Economic freedom and press freedom go hand in hand, given that a free press can only exist and serves its purpose in an environment that is free.

As shown in the accompanying chart, the more economically free a country is, the greater freedom enjoyed by the press.

Comparing the country scores in the Press Freedom Index with the ratings in The Heritage Foundation’s annual Index of Economic Freedom highlights the clearly positive relationship between the two important aspects of liberty, which reinforce each other.

Conversely—and most relevant during the current crisis—countries with scant economic freedom tend to lack press freedom as well, with their citizens mired in economic and political repression. Consider Venezuela, Cuba, China, Iran, and North Korea, among others.

The ongoing coronavirus pandemic provides a needed reminder that free-market capitalism is the fundamental foundation for a free and prosperous civil society, including a free press, without which our efforts to craft fact-based policy responses would be severely hamstrung.