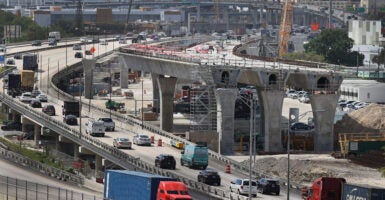 Democrats say they want bipartisan support for a multitrillion-dollar infrastructure package, while at the same time discussing ways to pass it over Republican opposition if necessary. Pictured: Construction workers build the Signature Bridge, replacing and improving a busy highway intersection at I-95 and I-395 on Wednesday in Miami. (Photo: Joe Raedle/Getty Images)

Now that the bloated, debt-financed “stimulus” package has been signed into law, Congress has begun working on its next spending-spree target, infrastructure.

In like fashion, Sen. Joe Manchin, D-W.Va., said in a recent interview that he would be willing to block infrastructure legislation that isn’t bipartisan.

Yet, the specific language Pelosi chose—coupled with comments from other prominent Democrats—suggests that this call for bipartisanship should be taken with a grain of salt.

From Pelosi’s statement: “Building our transportation system has long been bipartisan. It is our hope that spirit will prevail as we address other critical needs in energy and broadband, education and housing, water systems and other priorities.”

While it’s true that infrastructure bills often pass with strong bipartisan support, past federal infrastructure spending was focused on national networks, such as airports and the highway system.

What Pelosi and many others want is a big expansion of federal power, not a continuation of the bipartisan infrastructure status quo.

Just three days after Pelosi’s statement, the chairman of the Senate Environment and Public Works transportation and infrastructure subcommittee, Sen. Ben Cardin, D-Md., was caught saying that Democrats would likely push an infrastructure package through using the reconciliation tool. That can enable legislation to pass the Senate with a bare partisan majority.

Thus, Pelosi’s rhetoric on bipartisanship might well be a short-term fig leaf at best. If Republicans choose not to support another multitrillion-dollar progressive wish list, Democrats can simply use reconciliation to get as much of what they want as possible.

Since rhetoric in support of the infrastructure package will revolve around universally beloved buzzwords such as “jobs” and “schools,” it’s important to understand the problems with what is being proposed.

First, big spending comes with a big cost. Whether that cost takes the form of tax hikes, adding to the national debt, or both, that must be taken seriously rather than blithely dismissed.

Second, federal infrastructure spending has a terrible track record when it comes to creating jobs. Further, unemployment has fallen rapidly from where it was last spring, and the federal government is on course to spend more than $45,000 per household on COVID-19 relief and stimulus.

The idea that America needs yet more spending to stimulate the economy has no basis in reality.

Third, the proposal goes against many key principles that have served America well since its founding.

State and local governments tend to have responsibility for infrastructure projects that are local in nature, such as water lines and construction work at public schools.

This division of responsibility is helpful for accountability, transparency, and efficiency. If there’s a pothole on Main Street, you can tell the mayor. If your child’s school could use improvements, you can go to the superintendent and discuss whether funds in the budget should be reprioritized.

That’s far better than having everything run through Washington, D.C.

Congress is famously dysfunctional and already struggles to manage the leviathan-like federal government we have today. Federal bureaucrats are often unaccountable and inaccessible to the public.

The system of separating power between different levels of government, known as subsidiarity and federalism, is vital to the functioning of a large, diverse nation such as ours.

People in different places have different needs and preferences, and that’s best reflected by having government work at the closest level possible to the public it serves.

In contrast, the plan being formulated by Congress would place Washington at the center of funding nearly all forms of infrastructure.

Under the plan, local governments would be given federal grants to pay for projects. In exchange, localities would bend a knee to federal bureaucrats enforcing rules that make the projects cost more and take longer to complete.

Not only would this reduce the value of spending for important projects, but it would also entice local officials to use the “free” federal money to pay for dubious deals like the infamous “Bridge to Nowhere.”

Rather than furthering the delusion that Washington can solve all of the nation’s problems, Congress should instead reduce federal micromanagement of infrastructure projects.

Providing state and local governments with more freedom to fund and build what they need would mean we can get more done, faster, and with the same amount of money (or less).

In the meantime, Americans should recognize that despite the statement made by Pelosi, plans are well underway to ram another budget-busting bill through Congress, regardless of whether it has bipartisan support.