Did COVID-19 Permanently Change Our View of Government Power? 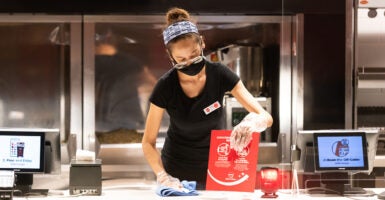 A worker cleans the concession stand at AMC Lincoln Square 13 on March 5 in New York City. AMC Theatres reopened its New York area locations that day, with new safety precautions in place, for the first time since closing in March 2020 because of the COVID-19 pandemic. (Photo: Noam Galai/WireImage/Getty Images)

Can the federal government ban evictions? Seems like a pretty straightforward question. But the answer touches on a deeper one, as yet unsettled: Will life after COVID-19 be normal?

Consider what a federal judge said recently when he struck down a Centers for Disease Control ban on evictions, which the Trump administration instituted last year and the Biden administration extended: “Although the COVID-19 pandemic persists, so does the Constitution.”

The court’s ruling in Terkel v. Centers for Disease Control and Prevention reminds us that a public health emergency declaration does not grant the government unlimited authority to regulate private behavior. Whether or not banning evictions is good policy, the government can’t exercise power without constitutional warrant, something many public officials appear to have forgotten since the pandemic struck.

Last March, Congress enacted a 120-day ban on evictions of “covered persons” (couples with incomes of less than $198,000) living in “covered properties,” defined as those participating in specified federal programs or financed through federally backed loans.

Landlords who violate the order are subject to penalties of up to one year of imprisonment and fines of up to $250,000.

The ban expired in July, but under a directive from then-President Trump, the Centers for Disease Control and Prevention revived it in September and extended it through the end of 2020. Congress then moved the expiration date to Jan. 31. Among Biden’s first official acts was to direct Centers for Disease Control and Prevention to extend it through March 31.

Lauren Terkel, a Texas property owner, challenged the order’s constitutionality. Government attorneys argued that the eviction ban is authorized by the Constitution’s Commerce Clause, which grants the federal government power to regulate interstate commerce. That clause, they claimed, gave the Centers for Disease Control and Prevention sweeping powers to “suspend residential evictions for any reason, including an agency’s views on ‘fairness.’”

“Real estate is inherently local,” he wrote in response to the government’s Commerce Clause argument. “Residential buildings do not move across state lines.”

Barker also noted that the order had only a tenuous connection to the pandemic. Unlike a quarantine order, the eviction ban is at best tangentially related to stemming the spread of infectious disease.

“Even though quarantining an infected person from new contacts would keep the person from traveling interstate,” he wrote, “the CDC order is not such a quarantine. The order applies without regard to a tenant’s infection with, prior exposure or vaccination against COVID-19. It applies without regard to whether an evicted tenant would move to a new city, much less a new state.”

Indeed, the government’s contention would mean that such orders did not have to rest on public health grounds at all, Barker observed.

“The government’s argument,” he wrote, “would thus allow a nationwide eviction moratorium long after the COVID-19 pandemic ends.”

And that is precisely the danger.

While it is unclear whether Barker’s ruling will be the last word on this case, especially given past Supreme Court precedents granting Congress broad power under the Commerce Clause, one thing is clear: The COVID-19 pandemic has affected the U.S. and the Western world in myriad ways, altering many of our cultural sensibilities.

Nowhere has this been more apparent than in the inversion of the constitutional order. Before the pandemic, we presumed that we had the right to run our businesses, worship in our churches, and move freely about our neighborhoods. We understood the government’s protection of health and safety as a prerequisite of liberty, not a reason to restrict it.

We are acclimating to the idea that liberty is contingent on government officials’ assessments of the latest COVID-19 metrics. Are new cases rising or falling? Are hospitals getting crowded? Have enough people been vaccinated?

Some restrictions are sensible and necessary. Others are misguided and counterproductive. But the most crucial question is this: Has the pandemic permanently altered our understanding of the prerogatives of government?

Before COVID-19, few would have conceived that the Centers for Disease Control and Prevention had the power to ban evictions. Now, we almost reflexively assume it can. Government lawyers argue—unsuccessfully before this judge—that a federal health agency’s power during a pandemic is virtually boundless.

That mindset endures among many federal, state and local officials even as new cases decline and immunizations accelerate. It will likely persist beyond the pandemic. Our understanding of government power and of liberty are at risk of permanent distortion.

At some point, we will return to churches and schools, shops and offices, theaters and stadiums because even the most overbearing governments will grant us leave to do so. Things will, in that sense at least, be normal again.

But in another sense, they may never be.

Recovering that foundational truth may prove more challenging than recovering from the pandemic.

Originally published by the Sun Sentinel