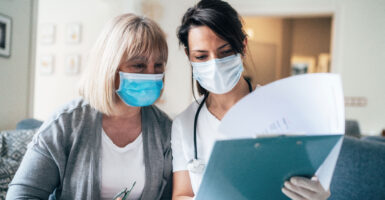 Official Washington, D.C., just got another early warning. The Congressional Budget Office recently confirmed the Medicare trustees’ 2020 report that the Medicare trust fund—the Part A account that funds the hospitalization and related services—faces insolvency in 2026.

Insolvency means that Medicare wouldn’t be able to fully reimburse hospitals, nursing homes, and home health agencies for promised benefits. In 2026, Medicare payments would be immediately cut by 10%, and the payment cuts would continue each year thereafter.

Medicare patients would be hit hard. You cannot cut provider payments for medical services without impacting the beneficiaries of those services.

Insolvency two years earlier or later makes little difference. Washington policymakers must soon make some big decisions and cannot escape responsibility for what will happen to the program, its beneficiaries, or the taxpayers.

There is nothing new here. Year in and year out, the Medicare trustees have repeatedly warned Congress and the White House that the Medicare trust fund meets neither short- nor long-term financial standards. It has been routinely running tens of billions of dollars in annual deficits, and is expected to generate red ink well into the future.

A demographic imbalance is increasing the pressure. The trustees report that over the last 35 years, Medicare enrollment doubled, and is projected to grow by 50% over the next 35 years. Meanwhile, the number of workers supporting Medicare beneficiaries is shrinking.

What to do? If Congress and the White House really wanted to eliminate Medicare trust fund deficits altogether—a big if—the trustees say that Washington could either raise the standard payroll tax from 2.9% to 3.66%, immediately, or reduce Medicare trust fund expenditures by 16%. That is unlikely.

The Medicare trustees nonetheless posit these stark options simply to “illustrate the magnitude” of the changes needed to eliminate deficits and insolvency. They recognize, however, that such immediate changes would be unpalatable, and measures are likely to be more gradual. Even so, the longer Washington waits, the more painful the solutions become.

Any hike in the federal payroll taxes to stave off the impending insolvency would be an untimely blow for small businesses, their workers, and their families following the government lockdowns, the recent economic contraction, and massive job losses.

The other option—cutting Medicare payments to Part A providers even more—carries risks of its own.

More recently, these institutions suffered a serious financial blow from government edicts to cancel scheduled care in response to the pandemic.

Even though hospital revenues have begun to rebound, and Congress provided hospitals with emergency payments, some hospitals are still struggling financially. This would not be a propitious time to hit them with another cut in Medicare reimbursement rates.

Finally, Congress could turn on the general revenue spending spigot to cover the trust fund losses. That would drop the pretense that Medicare Part A can continue as a “social insurance” program paid for by Medicare beneficiaries during their working lives. But that would pour more gasoline on Washington’s raging fiscal fires, generating even higher deficits and dangerous debt—now estimated at over $27 trillion—beyond that incurred by recent pandemic spending.

Painless solutions are nonexistent. But targeted solutions are available. Congress could enact a temporary Part A premium—the equivalent of a surcharge—to cover the Medicare trust fund’s projected deficit, and eliminate it when the fund is rebalanced.

But addressing the hospitalization trust fund crisis is only the beginning of serious Medicare reform. Washington policymakers must also phase in more substantial changes, including raising the age of eligibility to 67 in harmony with Social Security and indexing it to life expectancy, and further expanding “means testing” to reduce the burdens on middle-income taxpayers and beneficiaries.

The big change would be to build on the successes of Medicare Advantage, Medicare’s system of competing private health plans, and enact a comprehensive defined-contribution program and harness the powerful forces of consumer choice and market competition. That would not only improve the quality of care, but also control costs for beneficiaries and taxpayers alike.

That is a big job, and it must start sooner rather than later. It will take a combination of brains, guts, and bipartisan cooperation. It’s called statesmanship.

Originally published by The Virginian-Pilot