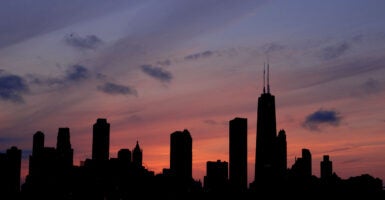 An electromagnetic pulse, or EMP, generated above the geographic center of the United States could destabilize much, if not most, of the U.S. power grid as well as disrupt or destroy any unprotected electronic. (Photo: iStock/Getty Images Plus)

During the blackout last month, several million customers were without power in Texas. Indeed, nearly half of the state’s electricity production was interrupted at one time as a result of the record cold temperatures.

In the media, scenes flickered across our (well-powered) screens of the significant challenges facing Texans from the blackout and the weather, including freshwater shortages and finding warmth in the cold as the blackouts loomed.

But severe storms are not the only threat to America’s electrical grid.

What happened in Texas could be repeated on a national scale, affecting millions more Americans—but this time not at the hands of Mother Nature. Instead, it would be at the hands of a foreign enemy in the form of an electromagnetic pulse—or EMP.

An EMP is a large burst of energy that can cause significant damage to electronics.

Human-generated EMPs, which differ from naturally occurring geomagnetic disturbances (e.g., space weather), are created by artificial sources, which can include a possible premeditated explosion of a nuclear warhead (or warheads) high above the United States by a rogue state or other international competitor.

According to the October 2018 Department of Homeland Security’s “Strategy for Protecting and Preparing the Homeland Against Threats of Electromagnetic Pulse and Geomagnetic Disturbances”:

[A man-made EMP or naturally-occurring geomagnetic  disturbance] could damage significant portions of the Nation’s critical infrastructure, including the electrical grid, communications equipment, water and wastewater systems, and transportation modes. …

By one estimate, “A single nuclear burst 250 miles (400 kilometers) above Kansas [in the geographic center of the country] could destabilize much, if not most, of the U.S. power grid.”

In addition, unprotected electronics and electronic systems could be disrupted, damaged, or destroyed, including those in the energy, transportation, and agricultural and industrial production sectors—just to name a few.

According to a 2010 Oak Ridge National Laboratory study, a high-altitude EMP (or big solar storm) could affect “130 million Americans, could require 4 to 10 years to fully recover, and could impose economic costs between $1 trillion and $2 trillion.”

An EMP strike could mean no heating or cooling, no light, no water, no internet, and—in a matter of days—no access to food or medications, for millions of people, among other basic human need challenges.

The potential effects due to our slavish dependence on electronics for everyday life could be devastating.

Indeed, it is not only nuclear weapons that can create an EMP. An EMP can also come from radio-frequency weapons, though their range of effectiveness is smaller than that of a high-altitude EMP exploded above the Earth’s surface.

Beyond critical infrastructure, the potentially devastating effects of an EMP could also directly or indirectly permeate the national security establishment, undermining our ability to provide for the country’s defense.

An EMP attack or event, although a low probability, would be of high consequence and would have potentially severe repercussions on human prosperity, security, and life.

With little expected warning time for a military EMP, there is clearly a need to address this challenge.