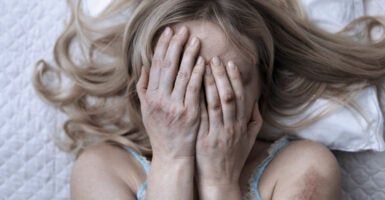 Survivors of domestic violence and sexual assault are now at greater risk because of President Joe Biden’s executive order on transgenderism.

Although the heat of attention recently has been on the proposed Equality Act, the fact is that Biden’s sweeping executive order in January accomplishes many of that legislation’s objectives and already has put women, and women’s rights, in peril.

Biden’s order directs each federal agency to review all existing orders, regulations, guidance documents, policies, programs, or other agency actions promulgated or administered by the agency under Title VII or any other federal statute or regulation that prohibits sex discrimination.

One such important yet little-known regulation to keep an eye on is the equal access rule at the Department of Housing and Urban Development.

The Obama administration created this particular HUD rule in 2012. It opens all HUD housing programs to eligible families and individuals “without regard to actual or perceived sexual orientation, gender identity, or marital status.”

The rule prohibited inquiries into gender identity in determining program eligibility or making housing available. However, it permitted inquiries related to an applicant’s or occupant’s sex for the limited purpose of determining placement in temporary, emergency shelters with shared bedrooms or bathrooms.

The Obama administration’s HUD expanded the rule in 2016 by amending it to mandate that transgender individuals and others “who do not identify with the sex they were assigned at birth” get access to programs and accommodations in accord with their gender identity. (Some of these programs and accommodations are operated on a single-sex or sex-specific basis, and are collectively known as single-sex facilities.)

HUD’s equal access rule of 2016 went beyond what was supported by congressional enactment in restricting single-sex facilities.

Congress has prohibited discrimination on the basis of sex in dwellings under the Fair Housing Act, but it has not yet acted to prohibit consideration of sex in temporary and emergency shelters, many of which offer sex-specific housing.

HUD’s rule effectively restricted shelters from making the policy choice permitted under the Fair Housing Act by requiring shelters to allow biological males who self-identify as females to be admitted to female-only shelters.

The proposed Equality Act would change all that. But for the time being, Congress has allowed sex to be considered in placing individuals in emergency shelters.

So, what was the result of the 2016 rule? It did harm to actual victims of domestic violence and sexual assault.

And with Biden’s recent executive order, this harm once again is a real threat to female survivors of assault and abuse.

In 2018, nine homeless women filed a lawsuit in Fresno, California against Naomi’s House, a homeless shelter that received HUD funding. In the case, McGee v. Poverello, the women alleged that the shelter enabled sexual harassment because a biological male who self-identified as a female entered the shelter and showered with females.

The lawsuit alleges that the individual in question would “repeatedly make lewd and sexually inappropriate comments” to some of the women and “stare and leer at [them] while naked and make sexually harassing comments about their bodies.”

The individual also showed the women “sexual pictures and/or videos” depicting the individual and made “sexual advances,” the suit alleges.

This lawsuit demonstrates how HUD’s 2016 rule gave little consideration to a shelter’s need to take care of the mental health and privacy concerns of at-risk clients. The need for privacy is especially strong among women who have been abused and have psychological issues that prevent them from cohabitating with those of the opposite sex.

Anecdotal evidence also shows that some women fear that non-transgender, biological men may exploit the process of self-identification under the rule to gain access to women’s shelters. Perpetrators perpetrate. That is who they are.

We must not lie to ourselves that abusers won’t take advantage of policies such as these to commit further abuse.

The rule also harmed many faith-based shelter providers, such as the Alaska Hope Center. Essentially, faith-based organizations were being coerced to abandon their beliefs in order to participate in government-funded programs, or forgo federal funding.

The harmful consequences of HUD’s equal access rule should serve as a dire warning to the Senate not to allow passage of the Equality Act.

In response to these harms, the Trump administration revised the HUD regulation in 2020 to allow housing providers, as permitted by the Fair Housing Act, to consider biological sex in placement and accommodation decisions for single-sex facilities.

The 2020 revision of the rule gives single-sex facilities the flexibility to serve their unique populations. HUD-funded housing providers may establish their own policies for determining whether to restrict access to a single-sex facility based on an individual’s sex for purposes of admissions and accommodation.

Nothing in the revised rule restricts or prohibits shelters from maintaining a policy on placing and accommodating an individual based on gender identity.

But this progress is once again in peril because of Biden’s transgender executive order, which directs HUD to examine all its regulations relating to discrimination.

A new, more expansive rule undoubtedly will obliterate the Trump administration’s revised rule as a result of Biden’s order.

The Department of Housing and Urban Development again will return to prohibiting federally funded shelters from discriminating on the basis of biological sex, which means transgender females (biological men) won’t be denied access to a women’s shelter.

The consequences are clear and horrific.

To prevent further harm to female survivors of violence, Congress must not allow the policies of Biden’s transgender order to become enshrined in federal legislation through the Equality Act.