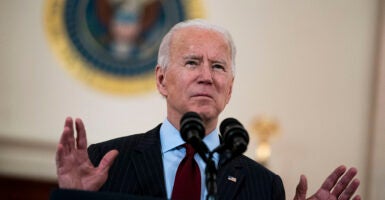 CNN host Brian Stelter asked a big question on his Sunday show: “What’s the future of fact-checking now that [Donald] Trump is out of office?” He proclaimed it was “fraught with complexity, and allegations of bias and shouts of false equivalence.”

This is not complex. In 2016, a Rasmussen poll found that only 29% of the public trusted the media’s “fact-checking” of presidential candidates. There’s not just “allegations” of bias but easy and daily confirmation of bias.

Stelter tried to insist—on behalf of his network—that the fact-checking focus is now on President Joe Biden. CNN fact-checker Daniel Dale explained, “[I]t’s basically more like a smattering of falsehood than the daily avalanche we got from Trump, but he’s not perfect.”

Dale has tried to demonstrate that he’s checking Biden, issuing an online report on 40 of Biden’s statements from his first month in office.

But there’s a catch. Dale’s becoming less visible. Mediaite noted on Feb. 20 that this CNN fact-checker was featured on air or mentioned by name on average more than once every other day since June 2019.

But exposure dipped noticeably after the election, and “since President Joe Biden’s inauguration … Dale has only appeared on the network once. And that appearance, last Friday, was to fact-check Donald Trump’s lawyers.” Dale showed up with Stelter just three days after the Mediaite piece was published.

In the first four weeks after Biden took the oath, PolitiFact issued two Biden fact checks—two! Last week, it fact-checked three of Biden’s statements from the CNN town hall, since that was apparently a little too prominent to ignore. It added one more on Feb. 22. That’s six fact checks of the president so far.

Let’s compare that to fact checks defending Biden. In the same time frame, PolitiFact issued 19 fact checks of Biden’s critics, and all but one of them were proclaimed “Mostly False,” “False,” or “Pants on Fire.” (There was one “Half True.”) There’s apparently no such thing as a “True” Biden critique.

Then Stelter made it worse, asking the PolitiFact boss about New York Gov. Andrew Cuomo: “Do you think Cuomo has been given an easy break by the media, and is that changing?”

This is a humorous question to come from the Cuomo Brothers Comedy Network. But Holan’s answer about Cuomo’s record with sending recovering COVID-positive patients to New York nursing homes was a doozy.

“I think the situation in New York is really complicated,” she insisted. “We don’t see hard evidence that that made a significant difference in COVID deaths. If you look at the statistics, New York is about having the same numbers as other states around the country. And the issue was employees, workers in the nursing homes who didn’t realize they were bringing COVID-19 into the nursing homes. So, it’s a really complicated situation. There’s not clear-cut answers here.”

The “fact” guru claimed the most serious issue was nursing home staffers infecting the elderly, not the recovering COVID-19 patients?

In fact, PolitiFact is guilty of giving Cuomo an “easy break” last year. There are only 10 fact checks of Cuomo since January 2020, and six of them were “True” or “Mostly True.” Two were declared “Half True,” and two were “Mostly False.” There was absolutely nothing rated “False” or “Pants on Fire.”

If you isolate just the COVID-19 fact checks, there are seven of Cuomo, and the first “Mostly False” came on June 13. The other one was Oct. 16.

This is why people should laugh uproariously when Holan defends her site by claiming, “PolitiFact seeks to present true facts, unaffected by agenda or biases.”