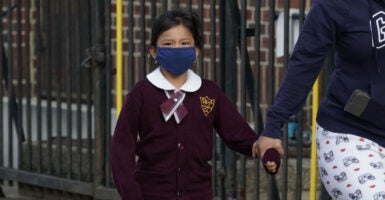 Mandatory school closures have led to a drastic drop in enrollment in Catholic schools, leading many to close their doors permanently or merge with other schools. Pictured: Children arrive for the first day of school at the St. Bartholomew Catholic Academy in the Queens section of New York Sept. 21, 2020. (Photo: Timothy A. Clary/Getty Images)

With schools across the country now approaching a full year of state-mandated closures, it’s important to remember the long-term effects that the lockdown has had.

Catholic schools in some parts of the country saw their enrollment figures drop dramatically, and at this point it’s not clear if they will ever bounce back.

A new report by the National Catholic Educational Association found that 2020-21 enrollment at Catholic schools was down 6.4%—a loss of more than 110,000 students—the largest drop in enrollment in 50 years.

The top 10 dioceses with the most robust Catholic school enrollments in the nation lost a total of 36,000 students alone. Of that number, nearly 60% of the enrollment decline came from schools in the dioceses of New York, Los Angeles, and Chicago—regions that were subject to some of the harshest lockdown measures.

Unfortunately, many of these schools simply couldn’t survive such a drastic reduction in students. The same report found that nearly 210 Catholic schools have so far been forced to either close their doors or consolidate with nearby schools.

Reduced enrollment was most severe among elementary students, with the National Catholic Educational Association reporting an 8.1% decrease in enrollment compared to the previous year.

Catholic schools in the U.S. have long been a boon to underserved communities, as the schools often make it their mission to serve students who are most in need.

Disadvantaged communities have been particularly affected by the recent closures, with more than half of the closed schools located in low-income urban areas.

The National Catholic Educational Association report noted that the school closures impacted more black students and those eligible for federal assistance through Title I, which provides funding for low-income schools.

These closures will be a heartfelt loss to many families.

At the same time, during the pandemic, many parents are desperate to send their children to Catholic schools. While Catholic school enrollment has dropped in the aggregate, waiting lists for prospective students have grown.

In 2020, nearly 40% of Catholic schools report that they have a waiting list for students—an increase of more than 11 percentage points from 2019.

School choice options could enable more families to select into private schools, including Catholic schools, that are the right fit for them. For instance, 100% of families living in Cleveland, Ohio, can use public funds to pay for private school tuition.

In light of a recent report by the Centers for Disease Control and Prevention, which indicated that in-person learning is rarely the source of COVID-19 outbreaks, state policymakers and local officials should remove regulatory barriers that prevent schools from reopening.

About 44% of states have already introduced school choice proposals this year—19 of those proposals would provide students with private school scholarships or education savings accounts.

State policymakers should continue to expand the education marketplace, allowing funds to follow the student. Catholic schools have long served as an excellent option for many students—especially those from low-income families and underserved communities.

Expanding education choice could be the key to ensuring that the education marketplace retains the rich and dynamic education offered by Catholic schools.