Rush Limbaugh: A Tribute to a Master of Words 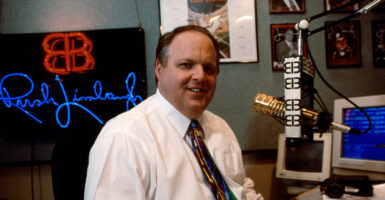 For more than 30 years, Rush Limbaugh was No. 1 in the ratings—with 15 to 20 million listeners per week. (Photo: Mark Peterson/Corbis/Getty Images)

Rush Limbaugh, a longtime friend of The Heritage Foundation, was the great popularizer of conservative ideas.

He revolutionized talk radio in the 1980s, when President Ronald Reagan deregulated AM radio, with his unique blend of shrewd analysis and often biting humor. No progressive idea was safe when Rush took it on.

No one could talk or think faster than he—for three hours every afternoon five days a week. He spent hours reading and studying for his program—no one was better prepared than he.

He loved to mock the hypocrisies of the left, like the moralizing of Sen. Ted Kennedy, the “Hero of Chappaquiddick,” who savaged Supreme Court Justice nominee Robert Bork on the Senate floor, where he couldn’t be sued for libel.

Rush was a deeply rooted conservative whose favorite magazine growing up was National Review. For all his fame, he was a humble man who, once invited to have dinner with National Review founder Bill Buckley in his Manhattan townhouse, told the driver to go around the block twice before summoning up the nerve to go inside.

Rush appealed to conservatives of all kinds. When The Heritage Foundation published Bill Bennett’s monograph “The Index of Leading Cultural Indicators,” Rush made it a bestseller with one broadcast—73,000 people contacted Heritage for a copy.

His promotion of Newt Gingrich’s “Contract with America” helped Republicans to gain their first majority in the House of Representatives in 40 years.

Rush understood full well the power of ideas. He saw the importance of the tea party and its Constitution-based populism, and encouraged its members to contact Heritage for a copy of its pocket-size Declaration of Independence and the U.S. Constitution. Heritage sent out nearly 3 million copies in 2009 and 2010. He was impressed with the tea party’s mantra: “Government must tax and spend less.”

When liberals tried to increase tax revenues through a value-added tax, conservatives stressed the hidden nature of a VAT and predicted it would not be a substitute for present taxes, but would become an additional tax on the already over-taxed public.

Rush seized on the “hidden” nature of a VAT and helped create the climate that persuaded the Senate to vote 85-13 against a VAT as “harmful” to the nation.

Whatever the issue—taxes, immigration, education, culture—Rush Limbaugh offered commonsense conservative analysis, along with a slice of satire and some rock ’n’ roll. His voice may be still, but his example continues to inspire radio hosts from coast to coast.