Right Side of History: The Truth About Ted Kennedy and Chappaquiddick 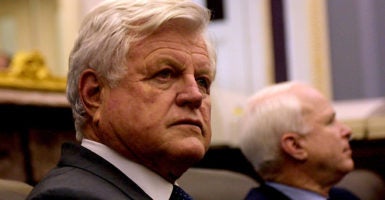 On this week’s episode, hosts Jarrett Stepman, an editor at The Daily Signal, and Fred Lucas, The Daily Signal’s White House correspondent, discuss “Chappaquiddick,” the new movie about actual events involving Sen. Edward Kennedy, D-Mass., and the death of a young woman.

On July 18, 1969, Kennedy drove his car off a bridge on Chappaquiddick Island near Martha’s Vineyard after leaving a late-night party. Kennedy escaped the crash and left the scene, but passenger Mary Jo Kopechne, 28, died in his submerged car.

The movie, starring Jason Clarke as Kennedy and directed by John Curran, explores the role of the Kennedy family in helping the surviving Kennedy brother escape responsibility in the incident.

In Lucas’ review of the movie for The Daily Signal, he notes:

The film will make you think both about history and our current political environment. It also properly recognizes the humanity of a politician while still drawing clear moral lines—and placing Ted Kennedy’s choices on a clear side of that line.