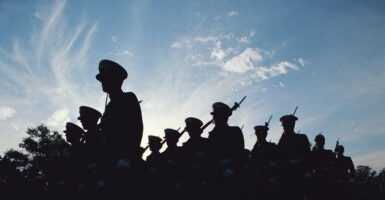 Like many other Americans, I watched events of this past summer in horror as violence roiled our streets from Seattle to Atlanta and its inevitable climax on Jan. 6 at the Capitol.

I took time then to have “the talk” again with my eldest daughter and made prudent decisions as to when and where we would travel in our city of Washington, D.C.

I was hopeful that we as a nation would come out of this trial more unified and more respectful of each other, and it was during this time, on July 1, that the U.S. Navy established Task Force One.

The task force just issued its final report, and there are some good things in it, as well as some issues that merit concern.

Task Force One had a terrific recommendation, to add “respect” to the three core values—honor, courage, and commitment—of the Navy, an omission which it is past time to remedy. Regrettably, however, a clear definition of “respect” is missing in the report.

The Navy merely offers that “respect” connotes “I see you and I hear you,” but it must mean much more if it is to truly achieve the type of diversity that actually elevates operational readiness—or, put another way, warfighting excellence.

To do that, respect must include a healthy intellectual curiosity for a range of views and experiences, so as to learn and incorporate elements that make the Navy team stronger. Unfortunately, such curiosity is not mentioned once in the report.

Rather, the report’s only factual evidence provided for its many recommendations are statistics of accession, promotion, and retention broken out along racial categories. That’s interesting information, but without context, it’s incomplete.

Missing is more analysis for the “why” behind Navy promotion board decisions. That’s a process that I have been a part of, and I know every board has guidance on which promotion decisions are to be based.

Promotion board rationale for selection and nonselection is important feedback for aspiring officers and sailors. A thorough review of those reasons would illustrate the root causes of poor performance, promotion, and accessions. A future Task Force One report should provide those insights.

Along the task force’s four lines of effort—recruiting, retention, professional development, and innovation—56 recommendations are provided. A fifth line of effort, focused on processes, is a sort of catch-all.

However, none of those recommendations, as with past efforts to enhance diversity, will succeed without an honest root-cause analysis.

For example, systemic racism or inequalities are mentioned seven times in the report, but it provides no specific cases or instances where an instruction, rule, or process was found to be inherently racist or promoting inequality.

If, as the report concludes, there are systemic inequalities, what are they specifically and how will they be corrected immediately?

Too often, the Navy—as with many other large organizations—focuses on process as a means to solve issues or build in delivery of desired results.

To that end, the historical record attests that people matter most. An example of overreliance on process is the recommendation to reestablish a women’s policy office at Navy headquarters. But, without articulating who should lead it and “how” as an agent for change, it runs the risk of becoming merely another policy focal point.

That said, the investment in education and associated outreach to more communities is greatly welcomed. Those would include reestablishing the BOOST program to assist officer candidates who are promising, but who have weak academics, and Naval Academy student exchange programs with historically minority institutions.

However, without an honest accounting of the facts behind the myriad symptoms detailed by Task Force One, the Navy runs the risk of chasing after what is easy or cheaper intellectually and paying dearly later.

Also troubling was the task force’s pledge taken by its members to “advocate and acknowledge all lived experiences and intersectional identities” and a focus on evaluating, among several other issues, “ableism.”

I had to look up “ableism,” as I had not heard of it before. Ableism is “discrimination in favor of able-bodied people.” That concept may have a place in civil society, but the U.S. military is different.

Inclusion of that term suggests that in the course of its study, Task Force One may have become unmoored from the precepts of military service. In fact, U.S. law requires that in order to qualify for military service, citizens must be “able-bodied.”

So, in a way, the military must necessarily discriminate in favor of able-bodied individuals.

Elements of the Task Force One report, such as that, suggest influences that could lead to actions that reduce—rather than increase—military readiness.

Hopefully, that pledge is just a fleeting statement intended to garner the broadest input, taken by those involved in researching and crafting the report. But if it’s meant to be a clarion call to sustained action by apparatchiks judging the virtue of others against a fungible metric of “respect” or “ableism,” there is risk.

That should not become a distraction from the meritocracy inherent in the technical and natural condition of being on a ship on an unrelenting sea.

Nobel laureate Aleksandr Solzhenitsyn’s wisdom was prescient on this matter; namely, for the Navy to succeed in its egalitarian endeavor of warfighting excellence, its approach must be irrefutable on its merits to be sustainable. Put another way, justice is not delivered by committing an injustice in its name.

Without an honest, fact-based, root-cause analysis of the Navy’s diversity challenges, it will never become the institution we need it to be.

The recent Task Force One report misses the mark, but perhaps future efforts can hit it.