It Didn’t Start on Jan. 6: Brief History of Terrorist Violence at Capitol 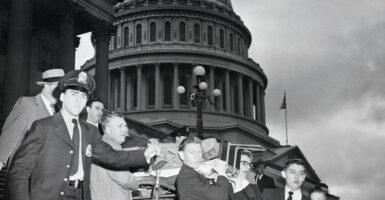 Jan. 6, 2021, was not the first act of terrorism inflicted at the U.S. Capitol. Pictured: Then-Rep. Kenneth Roberts, D-Ala., who was shot in the leg by Puerto Rican nationalist terrorists in the House of Representatives on March 1, 1954, is carried down the steps of the Capitol building on a stretcher and taken to a nearby hospital. Four other lawmakers were also injured in the shootings. (Photo: Bettmann/Getty Images)

The nauseating invasion of the Capitol on Jan. 6 wasn’t the only time the building has been attacked. There were three previous acts of aggression, all perpetrated by leftist activists.

Democratic presidents have commuted the sentences of most of the individuals arrested and charged in relation to those attacks.

The attacks were the 1954 shooting of members of the House of Representatives by terrorists supporting the cause of Puerto Rican separation from the United States; a 1971 bombing by the domestic terrorist group the Weather Underground; and another one 12 years later, by a group of Weathermen who identified themselves as the Armed Resistance Unit.

The March 1954 shooting was in many ways the most dastardly. Three men and one woman—Rafael Cancel Miranda, Irving Flores Rodriguez, Andres Figueroa Cordero, and Lolita Lebron—entered the House of Representatives’ visitors gallery, which hangs over the floor of the House, and proceeded to observe lawmakers debate the subject of migrant workers from Mexico.

At one point, the four got up, Lebron shouted “Viva Puerto Rico Libre” (“Long live free Puerto Rico”), and unfurled a Puerto Rican flag. All four took out semiautomatic pistols they were carrying and proceeded to spray with bullets the defenseless members of Congress below.

The four—all in their 20s—didn’t succeed in killing any of the congressmen, but did wound five. They were quickly arrested.

Figueroa Cordero died in 1979, but the other three lived long lives of leftist activism. Cancel Miranda died last March, “a hero to many who favor independence for Puerto Rico,” according to a fawning New York Times obituary.

Carter’s secretary of state, Cyrus Vance, said the release “would be a significant humanitarian gesture and would be viewed as such by much of the international community.” Carter later told the Congressional Hispanic Caucus that he had released them for “humane” reasons. “Over 25 years was long enough,” he said.

The four were unrepentant, however. At least two of the terrorists said they would not rule out using violent means again, which was probably the reason then-Puerto Rico Gov. Carlos Romero Barcelo sent Carter a “strong and forceful” letter against releasing unrepentant terrorists and warning of dangerous repercussions—a letter Carter ignored.

For the record, Puerto Ricans at any time they want can end the relationship they have had with the United States since the 1898 Spanish-American War.

The island has held no fewer than six referendums on its status. In the most recent one, in 2020, Puerto Ricans were offered a “yes” or “no” choice on the question, “Should Puerto Rico be admitted immediately to the Union as a state?”

No arrests were made, nor were charges filed in connection with the 1971 bombing of the Capitol by the Weather Underground. There were, therefore, no sentences to commute. The bombing did cause $350,000 in damage.

According to author Bryan Burrough, the man known as the “bomb guru” of the terrorist group, Ron Fliegelman, said years later that he “believes” he may have built the device. The Weathermen said they were protesting the invasion of Laos by U.S.-supported South Vietnam.

The Weather Underground was formed in 1969 by a handful of wealthy or middle-class white students—including Bill Ayers, who after emerging from hiding transformed into a professor in Chicago and went on become Barack Obama’s political mentor there.

Coming out of the more peaceful Students for a Democratic Society, the so-called Weathermen were committed to spreading communist revolution through violent means, and were soon later identified as a domestic terrorist group by the FBI.

The Weathermen were at it again a dozen years later in 1983, setting off another bomb that “tore through the second floor of the Capitol’s north wing,” according to the U.S. Senate history site.

Moments earlier, a group calling itself the Armed Resistance Unit called in a warning to the Senate switchboard, but lives were spared only because debate had ceased earlier than expected.

That time, there was $1 million in damage. The reason perpetrators gave was U.S. military involvement in Lebanon and Grenada.

In 1988, the FBI arrested and charged seven men and women for execution of the blast. They were Marilyn Jean Buck, Linda Evans, Susan Rosenberg, Timothy Blunk, Alan Berkman, Laura Whitehorn, and Elizabeth Ann Duke. All were either members of the Weather Underground or had some link to it. Some were also closely associated with the May 19th Communist Organization.

Some of them pleaded deals and were eventually charged for other crimes. Some others were paroled, and one of them, Duke, is still on the lam with a heavy FBI reward out for her.

Two of them were serving long sentences in 2001: Evans, a 38-year sentence, and Rosenberg, a 58-year term, not for the Capitol bombing, but for a New Jersey weapons case. Then, in his last day in office—with only two hours left—President Bill Clinton pardoned both.

Rosenberg is now the vice chairman of the board of Thousand Currents, the deep-pocketed funder of hard-left causes, which until last July was the fiscal sponsor of the Black Lives Matter Global Network Foundation, the main BLM organization.

In a 1989 interview she did from prison, Rosenberg said, “One of the things that’s clear is that the government is trying to get us to reassess, to apologize, to get us to say we won’t ever do anything again, and, for all of us, certainly for myself, I’m not going to say that to the greatest terrorist state in the world.”

Clemency has its place, in dire cases and where there has been repentance. Violence on all sides needs to be condemned, however—and vigorously prosecuted.

A version of this column first appeared at Fundaciondisenso.org.