1776 Commission Can Have Second Life Outside Federal Government 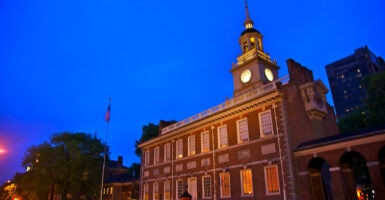 While the Biden administration may have disbanded the 1776 Commission, its members now have the opportunity to revive its work outside of government. Pictured: Independence Hall, where the Founding Fathers signed both the Declaration of Independence and the U.S. Constitution. (Photo: Barry Winiker/Getty Images)

Adam Kissel is senior fellow of the Cardinal Institute for West Virginia Policy.

President Joe Biden may have canceled the 1776 Commission, but that doesn’t mean that the commission itself cannot meet outside of the federal government. It is a shame that the president does not want a conversation about the principles of equality and liberty that animate our national life, but a lot of Americans still do.

Biden didn’t cancel the 1776 Commission because of its report, which critics said used no historians (false) and was plagiarized (false). He canceled it because he didn’t want it. The American people can bring it back, and we don’t need government approval to do so.

In recent months, we’ve seen violent activists pull down statues, while others trampled through our Capitol. The last thing we need is for the new administration to cancel a sincere effort to inspire and unify Americans around our most fundamental values.

American values really are unifying: no matter who we are, we all can appeal to the principle of equality under the law when someone violates our civil rights.

We all—no matter our viewpoint, background, or religion—can appeal to First Amendment principles to protect our right to think, believe, and share our best understanding of the truth. Or even to say what’s false—in a film, or novel, or a joke, or just for fun.

We all can point to the fact that we are created equal under God.

No other country was founded on these basic ideas. We are exceptional because our founding ideas are universal, and we based our Constitution on them.

We can better love and appreciate America, and we can be more patriotic, by understanding these ideals and acknowledging that no race or religion is excluded from this inheritance.

The Biden administration has weakened its goal of unifying the country by canceling the 1776 Commission. However, this presents an opportunity for the commission’s members. Now, they can start over, wherever they choose, and keep up the good work.

The good news is, we don’t need government help to love our form of government. We don’t need a billion-dollar federal bill to get states to teach American history. We don’t need the Department of Education to give us a curriculum.

Parents, school boards, schools, cities, and states that are in favor of fact-based patriotism can support the effort of teaching our founding principles to the next generation.

It is true that in America, we have often failed to measure up to our ideals. That is simply another reason why we need to remember the principles that we were founded on, including the bedrock principle that “all men are created equal.” It is by passing down these principles that we become a “more perfect Union.”

Or, in the words of the 1776 Commission report: “The truths that equality and liberty belong by nature to every human being without exception must be taught as the moral basis of civic friendship, economic opportunity, citizenship, and political freedom.”

If you love equality and if you love liberty, you have two very good reasons to love America, warts and all. Pointing out flaws only has meaning against a backdrop of ideals such as these.

“An authentic civics education,” the commissioners say, “will help rebuild our common bonds, our mutual friendship, and our civic devotion.”

There is no better source of American unity than the principles we share as codified in the Constitution. Let’s rededicate ourselves to understanding them and sharing them. Let’s petition our government, again and again, to live up to them.