The Pro-Life Generation Does Not Have One Face, but Many 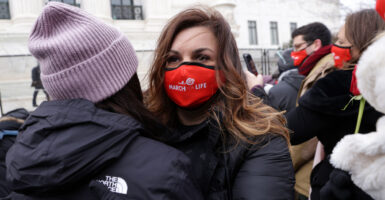 A growing number of millennials and members of Generation Z are on the side of science, and demand that politicians protect the sanctity of life. Pictured: Pro-life activists hug outside of the U.S. Supreme Court on Jan. 29. (Photo: Alex Wong/Getty Images)

Audrea Decker is the director of strategic initiatives and communications at My Faith Votes, a nonpartisan movement that motivates, equips and activates Christians in America to vote in every election, transforming our communities and influencing our nation with biblical truth.

Two years ago, I sat with my husband in an Urgent Care patient room, waiting for the doctor to prescribe me something to help relieve my flu-like symptoms.

After a quick test, the doctor returned with a serious look on his face. He said, “We’ve looked at the results and you’re actually pregnant.”

I was shocked and overjoyed at the same time. The doctor continued, “If this is not a desired pregnancy, I can make some recommendations.” I quickly replied, “It’s desired.” He said it again, “Well, if it’s not, I can make some arrangements.”

This is the culture my generation will change.

As a 25-year-old mother, I am one of the many faces of the pro-life generation. I am—along with an increasing number of my fellow millennials and members of Generation Z—on the side of science, and demand both political parties stand for the sanctity of human life.

Tragically, the Biden administration has rescinded the Mexico City policy, which was introduced by the administration of the late President Ronald Reagan in 1984.

The policy, which has been repealed and reinstated by different administrations over the years, prevents international nongovernmental organizations from using U.S. funds or other funding for abortion or promoting abortion among the people the NGOs are serving as a condition for receiving U.S. aid for family planning programs.

This move means international abortion organizations will be funded, as least in part, by U.S. taxpayers, and that it may become easier for women to have—or be forced to have—abortions in places where sex-selective abortion is commonly practiced.

The Federal Government must take action to ensure that women at home and around the world are able to access complete medical information, including with respect to their reproductive health. … It is the policy of my Administration to support women’s and girls’ sexual and reproductive health and rights in the United States, as well as globally.

I wonder: Does this “complete medical information” include alternatives to abortion? And what about the rights of girls in the womb who can’t speak for themselves? According to the United Nations Population Fund:

Today, around 140 million women are believed to be ‘missing’ around the world—the result of son preference, including gender-biased sex selection, a form of discrimination. … The resulting gender imbalance also has a damaging effect on societies. Instances of increased sexual violence and trafficking have already been linked to the phenomenon.

While women and girls deserve to be compassionately cared for physically, mentally, emotionally, and spiritually, we have to acknowledge the global fallout from policies that make practices like female feticide possible.

Additionally, this decision by the Biden administration flies in the face of the American public. A new Marist Poll commissioned by the Knights of Columbus shows 77% of Americans “oppose” or “strongly oppose” the use of tax dollars for international abortions, including Americans who identify as pro-choice.

It’s unacceptable for politicians to turn a blind eye to the obvious. Thanks to 3D ultrasounds, we can now see an unborn baby in incredible detail. A fetus in the womb is very clearly a human who possesses his or her own inalienable rights, starting with the most fundamental human right—the right to live.

While the media will lead you to believe pro-lifers are all 70-year-old white male Republicans from the Bible Belt determined to trample on women’s rights, nothing could be further from the truth. My generation, the pro-life generation, is incredibly diverse.

We aren’t discussed on the news, and politicians haven’t noticed us yet. We aren’t accepting awards at the Golden Globes or celebrated by the elites. But we’re telling doctors, politicians, friends, family, neighbors, and co-workers all across the country we will defend the basic human right to live.

We’re the generation that will speak up for the voiceless. Whether it’s women who are survivors of sexual harassment and assault, those held as slaves by sex traffickers, or the unborn baby whose life may be taken before he or she ever draws a breath.

Thousands of people were supposed to descend on the National Mall in Washington, D.C., on Jan. 29 for the annual March for Life this year. Although the march moved to an online platform because of COVID-19 restrictions, women and men around the world took time to advocate for the unborn because they believe every person has a right to live. They are just as resolved to be the generation that ends abortion.

If you want to join those of us committed to being a voice for the voiceless, there are many ways to do so. Learn how you can “Take Action for Life” with us.